Rumored at one point to start at a crazy high $1,200 and cost as much as $1,400 with maximum storage stateside, Apple’s face-scanning iPhone X ended up officially priced at “only” $999.

That’s for an “entry-level” 64GB configuration, of course, while 256 gigs of digital hoarding capacity will set you back $1,149, no strings attached, from October 27. It’s hard to consider that affordable, no matter how deeply in love you might be with the new “all-screen” design, but you can’t say those rates are entirely uncalled-for either.

Sadly, as is always the case with cutting-edge mobile technology, and especially fancy next-gen iGear, folks outside the US need to pony up even more cash. A lot of extra cash in Russia, for instance, where the aforementioned bleak analyst prediction basically came true… and then some.

The former Soviet country’s RUB 79,990 starting price equals roughly $1,390 in the most familiar Western currency, according to data gathered in a neat “global” graph by Business Insider. 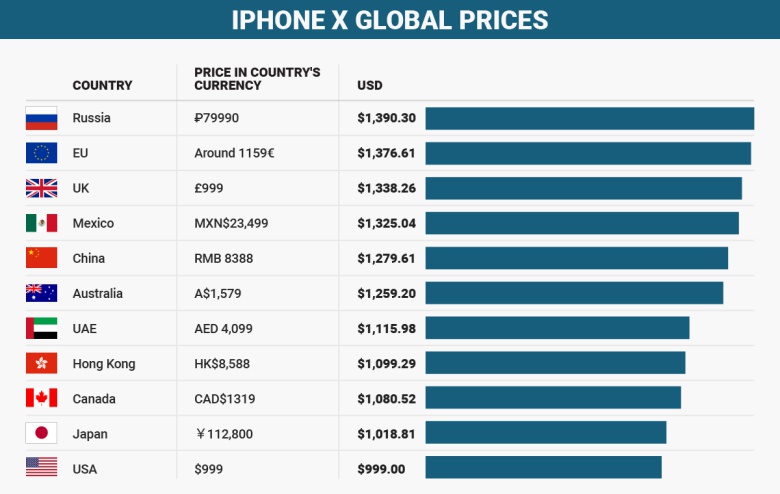 A little research of our own reveals the 256GB SKU fetches 91,990 rubles in “Mother Russia”, which amounts to an almost absurd $1,585 or so. But don’t think for a second prospective iPhone X buyers across the EU have it substantially better, as they’re required to cough up around €1,159, or $1,385. That goes up to the rough equivalent of $1,580 with enough storage space to accumulate every Game of Thrones episode aired so far.

Meanwhile, over in budget-focused China, the iPhone X costs at least RMB 8388, or $1,280, with Canada and Japan-based buyers the closest to US “affordability” levels, at $1,080 and $1,019 respectively. Still, everyone expects this bad boy to sell like hotcakes around the world.

More than just variable focal lenght and continuous zoom solution, the Galaxy S22 Ultra is the culmination of leaks brewing for years.