Can’t decide what iPhone 8 wireless charger to buy? Why not an IKEA lamp?

Until Apple manages to release its home-brewed AirPower wireless charging solution for simultaneous iPhone, Apple Watch and AirPods energy-loading, those looking to take advantage of the newly implemented iPhone 8, 8 Plus and X technology will need to pick a solid third-party pad, base, stand or mat.

But what if you think outside the box and decide to purchase an understatedly elegant lamp or nightstand? In case you forgot, or never got the memo in the first place, IKEA has been selling a wide range of its consistently affordable furniture with built-in wireless charging for a good couple of years now.

The Sweden-founded, Netherlands-based home furnishing giant wants to remind the world of this rather unconventional product lineup in the most original, cheeky and amusing way, basically copying and adapting some of Apple’s most effective advertising slogans over the years. 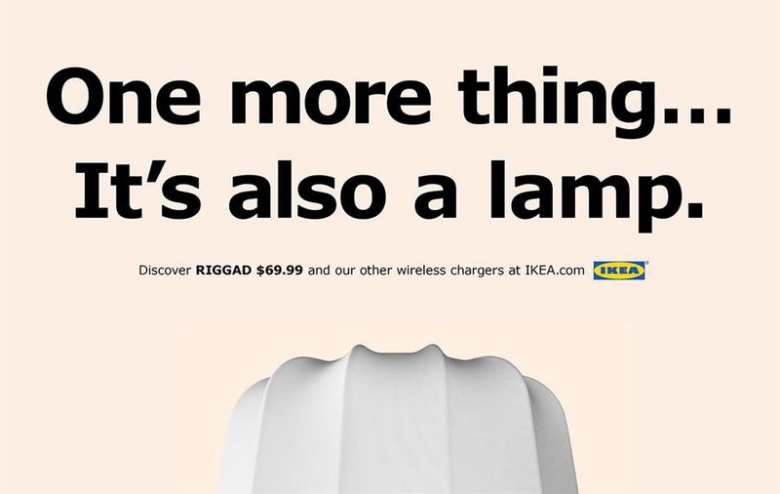 The timing of the buzzworthy new publicity campaign is clearly not coincidental, though if iPhone 8 demand is indeed substantially held back by the iPhone X shadow, maybe IKEA would have been better off shelving the marketing operation until early November.

Then again, this seems like a perfect time to make a few headlines with catchy jingles like “Link different” and “This charges everything” precisely because we’re not talking as much about the 8 as the X in six weeks.

If you’re considering asking Siri what lamp you should buy, IKEA recommends the $69.99 wireless charging-capable Riggad. Oh, and “one more thing” – the $60 Hektar or $85 and up Varv chargers are also lamps. Pretty cool, huh?