iPhone 6s rules best-selling 2016 smartphone list, followed by iPhone 7, 7 Plus and 6s Plus

Samsung’s top-selling 2016 handset, the Galaxy S7 Edge, was only ranked fifth overall, according to IHS, behind four, count’em, four iPhones.

Despite a highly publicized, reputation-damaging and money-bleeding Galaxy Note 7 recall, we already know Samsung had no problem leading the smartphone shipment hierarchy again last year. But that’s only because the chaebol sells so many different (and not-so-different) mobile devices.

When it comes to single-model popularity, as is the case for profits, Apple reigns supreme. According to fresh research from the IHS Markit Smartphone Shipment Database, the iPhone 6s was by far the best-selling handset of 2016, with the iPhone 7 in second place, and believe it or not, the 7 Plus in third.

Cupertino’s total domination is even clearer if you consider the fourth-place finish of the iPhone 6s Plus, followed in fifth by the Galaxy S7 Edge. What a whupping! Still, Samsung can be proud especially of the low-end Galaxy J3 (2016), which very closely follows the GS7 Edge, as well as the mid-range J5 and J7 (first editions), ranked eight and tenth respectively, right before and after the “regular” Galaxy S7. 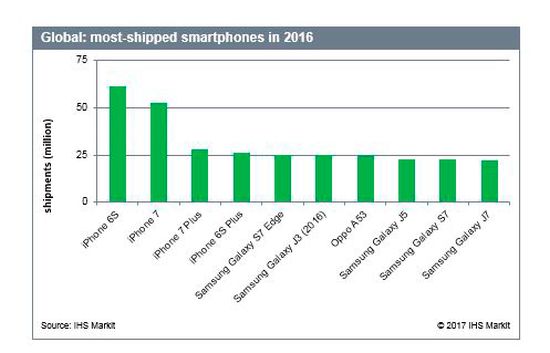 If you’re not excited about the upcoming renewed Galaxy J5 and J7 therefore, it turns out tens of millions of potential buyers in emerging markets probably are. Meanwhile, the little-known OPPO A53 stunned with a seventh-place 2016 finish, ahead of the J5, S7 and J7, underlining just how important a strong offline China presence remains for a budget-focused brand.

There’s obviously more than one way to skin a cat though, since Huawei can retain the global OEM bronze medal sans making this particular top ten list.

It seems that we could get a second iPad Pro launch this year, as a new report suggests that we would get one with a mini-LED display in Q4 2020
YouTube 1.8M
Facebook 572K
Twitter 196K
Instagram 134K
RSS