The long-rumored Apple iPhone 5se or SE stars in a couple of new leaked snapshots, alongside its alleged retail box.

Apple has never shied away from feeding tipsters false information on unannounced iDevices in order to keep the mystery going in advance of the company’s glitzy press events, and obviously, that’s now the case regarding at least some of the iPhone SE intel.

First, the name. Is it SE, 5se, 6c, 5e or 7c? Truly impossible to say, as a new set of pics reinstates the 5se moniker just when we thought we settled on SE, with no numerical prefix.

This latest 4-inch iPhone spotting alleges to show the upcoming handheld in the flesh inside its retail box, as well as the packaging by itself, with a 6s-like wallpaper adding a bit of credence to the report. Unfortunately, the device looks awkward as far as chromatics go, but perhaps we can chalk that up to unflattering lighting.

The Touch ID-integrating home button in particular resembles nothing we’ve seen before, in a bright blue hue, though it’s of course possible Apple is experimenting with revised color schemes and combinations. 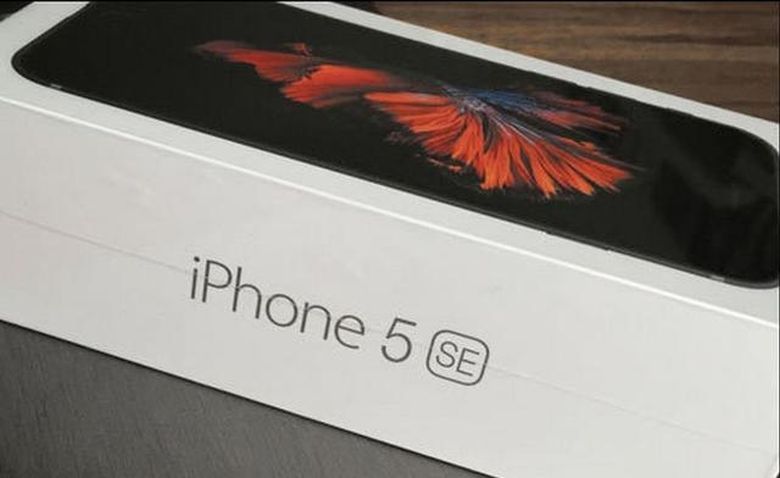 Otherwise, the iPhone 5se looks exactly as you’d imagine, and how insiders claimed it would, taking cues from both the 5s and 6s, with curved glass and smoothly rounded corners. There’s nothing new to report on the specification front, so we still expect the $450 or so phone to offer A9 processing power, 12MP photography prowess, 1,640 mAh battery juice, Apple Pay support, and Live Photos capabilities, but no 3D Touch interaction.