Not often we have the chance of comparing phones with excellent imaging capabilities. The Apple iPhone 4S, Samsung Galaxy S III and HTC One X are all known to deliver great capturing functionality (and we know we’re a couple of devices short on the list, but these are the hottest at the moment).

We’ve took the above three, plus the Nokia 808 PureView, for a spin. Pictures and videos captured in real life, side-by-side, just to make sure every tech and marketing talk on paper has a solid basis in reality.

First off, let’s talk pictures! In the comparisons below we have set all phones to grab eight megapixel images, with fully automatic settings and no zooming (because the 808 PureView would have had a great deal of advantage). Let’s take a look at 100% crops: 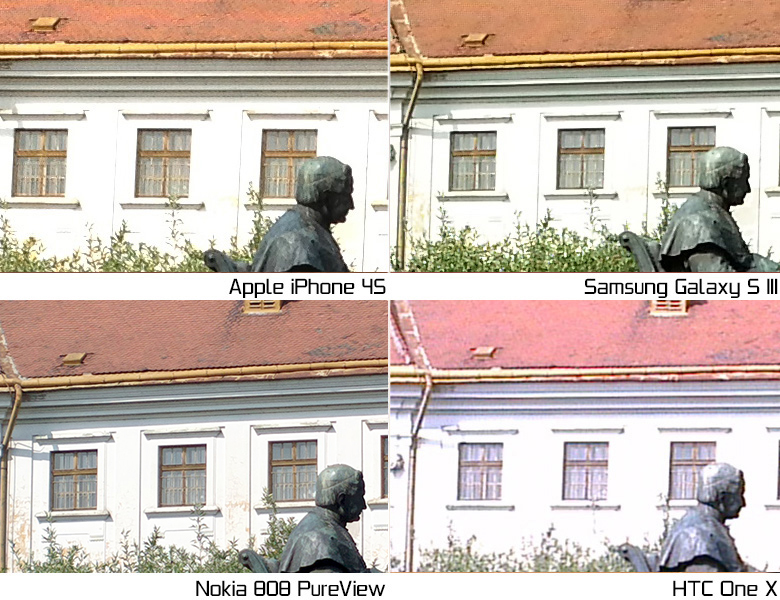 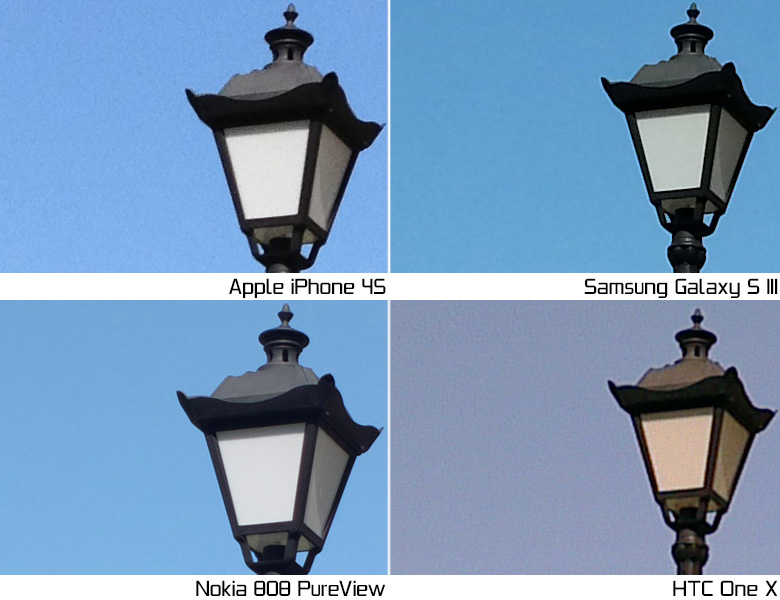 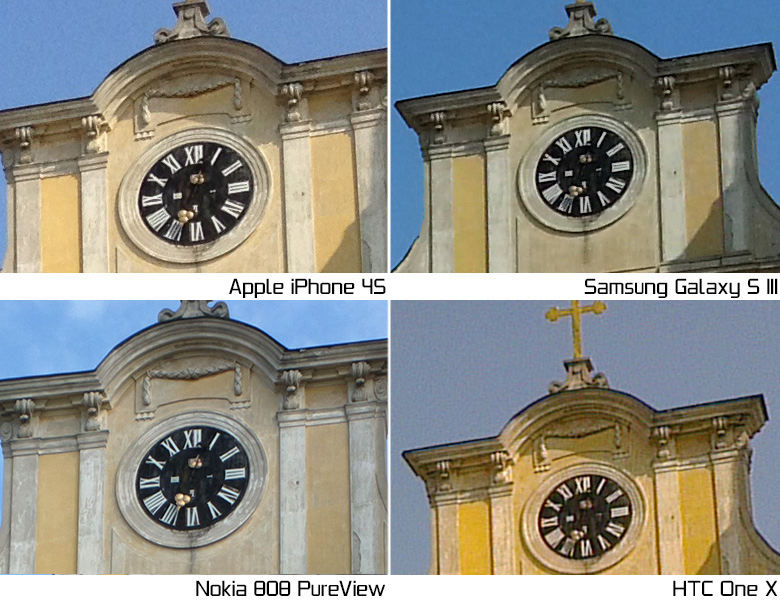 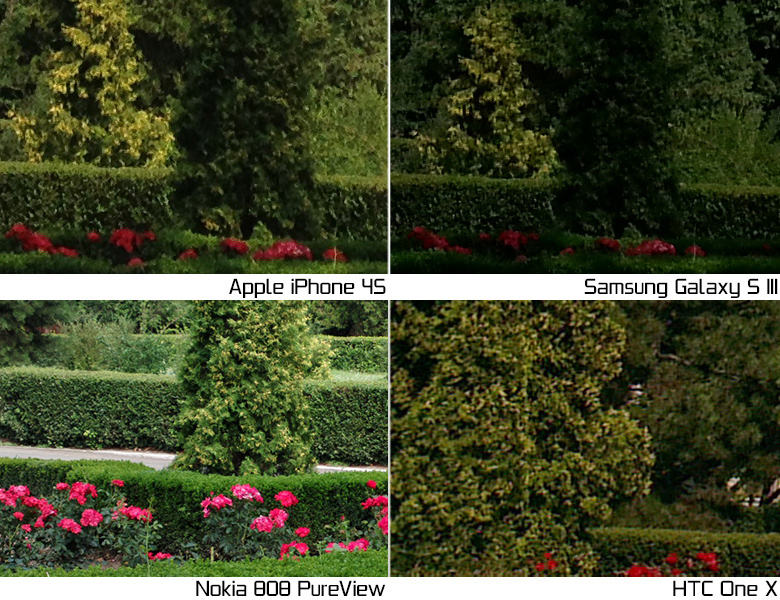 The thing that you will immediately notice (or you should) is that the pictures taken with the Nokia 808 PureView are either displaying reduced amounts of noise or completely lacking noise. The rest of the phones are all showing visible traces of artifacts generated by noise and the order (from less noise to more noise) is: Samsung Galaxy S III, Apple iPhone 4S and HTC One X.

As far as details are concerned, the 808 PureView captures them extremely well. You can take a look at the tiles in the first mosaic as well as the leaves in the last one. In this respect, the Apple iPhone 4S comes in second, followed by the Samsung Galaxy S III and the HTC One X.

Sharpness and blur is another thing you want to take a look at. The Samsung Galaxy S III and the HTC One X are trying to compensate for the lack of sharpness by applying an effect called “ghosting” (visible especially in the first and second mosaic, where you can see thin white outer contour lines). The 808 PureView and the iPhone 4S are thankfully lacking the “effect” and, out of the two, the 808 PureView again seems to deliver better images (even if one would be tempted to regard them as softer, blurrier in comparison to the artificial sharpness obtained on the two Androids — situations in which the software is looking at regions of contrast and increases/exaggerates it).

White balance and color saturation seems to be totally off on the HTC One X. The Galaxy S III produces more vibrant colors (which coupled with sometimes exaggerated contrast) results in slightly darker images (which give an impression of higher contrast ratios). The iPhone 4S and the 808 PureView seem to cope well with white balance but the 808 PureView seems to generate somewhat less saturated images (while still maintaining natural tones). 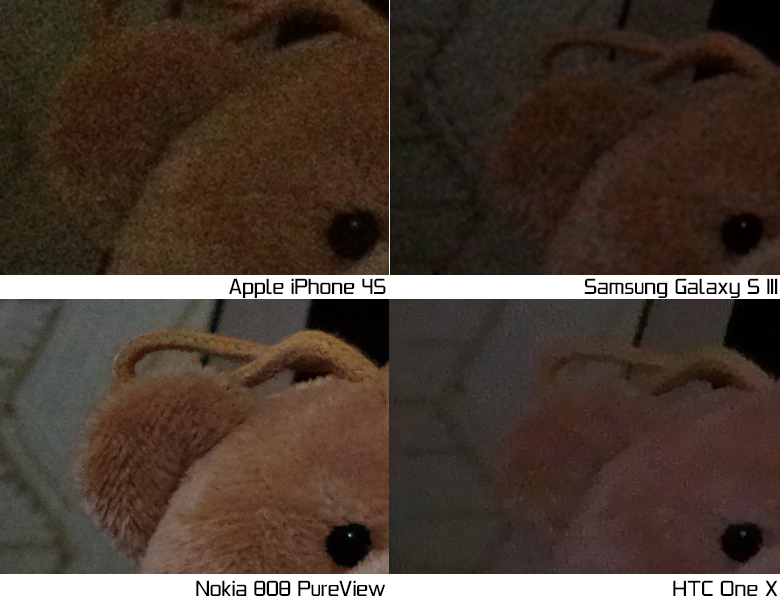 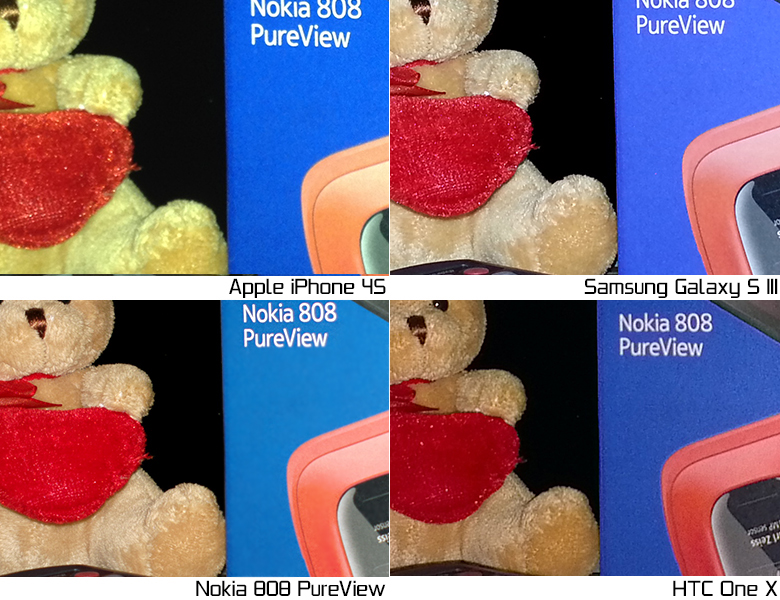 There’s a tremendous amount of noise in all pictures, except the ones taken with the Nokia 808 PureView. Don’t get us wrong, the PureView images still do contain some noise, but the amount is negligible thanks to the PureView technology of creating a super-pixel combined of several pixels taken at full resolution.

There is a clear winner here: the Nokia 808 PureView! In low light conditions with no flash, second comes the iPhone 4S which, even though displays great amounts of noise, managed to produce a sharp image. The Galaxy S III comes in third because of the blurred image and the photo taken by the One X is way to blurred (but with less noise), hence being the last one here.

In no light conditions and with flash on, the winner is clear again: the Nokia 808 PureView with its Xenon flash which preservers the correct white balance and offers enough light for good pictures and low noise. Whenever the 808 needs to focus, it lights up the LED flash to meter and focus correctly. Then, whenever the shutter is released, the Xenon flash is fired to produce great amounts of light (bright and as white as possible). The Galaxy S III comes in second even if it produces images that are sharper and noisier than the One X. The iPhone 4S could have snagged the second place but it was really struggling with white balance (as you can see, the bear is yellow and the red phone on the box is orange). Sadly, the One X is the worst performer in this category too.

A word of note here is that, while you can use third party applications — like Camera+ — on the iPhone 4S that give you the opportunity of having the LED flash light always on while in the dark, for proper white balance and focus, we used the stock camera app on every phone, hence the lower score.

As far as video recording is concerned, check out the four phones in action below. Please note that, while we tried to maintain lossless video editing and exporting, this is rather impossible (not to mention YouTube’s algorithm of compressing videos). Still, the results seem to reflect those experienced when comparing unaltered camera footage. Make sure to flip to 1080p and watch in full screen!

Take a good look at the samples above, both photographs and video. Take your time, analyze them and then let us know if you agree with our findings (or voice your opinions in the comments below).

If you’re looking for a particular Pixel 6 model and it is out of stock, you’ll now be able to join a waiting list.

Putting those M1 Pro and M1 Max chipsets to their maximum potential.