Apple is the unrivaled world heavyweight champion of smartphone profits, according to the latest Counterpoint Research analysis, with the iPhone X proving particularly lucrative during Q4 2017.
Published 17 April 2018, 10:12 EDT

Depending on who you ask, the iPhone X has either been a massive success or unprecedented flop for the still-unrivaled world champions of the mobile industry’s profits. Counterpoint Research analysts are certainly part of the former category, estimating the “all-screen” iOS handset alone generated 35 percent of the net financial gains of all of the world’s smartphone vendors combined during Q4 2017.

To put that into perspective, the iPhone X single-handedly made five times as much money between October and December as more than 600 Android OEMs lumped together in one shameful group. And the device wasn’t even up for sale until November 3. Mind you, we’re not talking about revenue here, but rather cold hard profits yielded from Q4 sales after taking production and marketing costs into account. 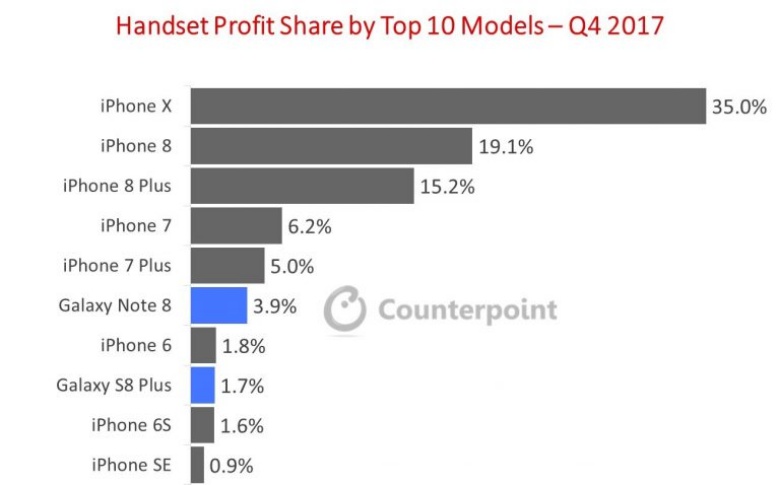 But while we’re on the subject, the iPhone X obviously dominated the industry’s total revenue haul as well, with an impressive 21 percent slice of the pie. All in all, global smartphone profits dropped 1 percent year-on-year, with Apple’s numbers nonetheless on the rise by the same tiny margin. A whopping eight of the world’s top ten Q4 2017 models by profit were iPhones, including the ancient 6, 6s and SE. The iPhone 6 even managed to beat Samsung’s Galaxy S8 Plus, while the Note 8 ranked sixth, behind the iPhone X, 8, 8 Plus, 7 and 7 Plus.

Thus, Apple unsurprisingly seized a monumental 86 percent of the market’s total surplus, although that still left plenty of scraps for Huawei to improve its figures by 59 percent YoY, and Chinese vendors in general to perform above expectations. Finally, Samsung took the OEM silver medal, but that’s the only feat worth mentioning for the world champion of shipments.