At least one 2018 iPhone X sequel will pack 4GB RAM, according to a new benchmark

There’s been a lot of talk about the number of iPhone X sequels in the pipeline, their display technology, diagonal sizes, overall design language and possible delays these past couple of months, but as always, we haven’t heard much in terms of Apple’s plans for processor or memory upgrades.

Until earlier today, that is, when an intriguing “iPhone11,2” benchmark was discovered. Before you jump to conclusions, let us stress that name probably doesn’t mean anything.

Obviously, we could see the iPhone 11 (or XI) released this fall to follow in the footsteps of the iPhone X, but that theory is in no way supported by Geekbench-revealed performance-measuring data.

Speaking of performance, this mysterious iPhone 11,2 prototype, which already runs iOS 12 in pre-release testing, is capable of racking up over 4,600 and close to 11,000 points for single and multi-core processing speed respectively. 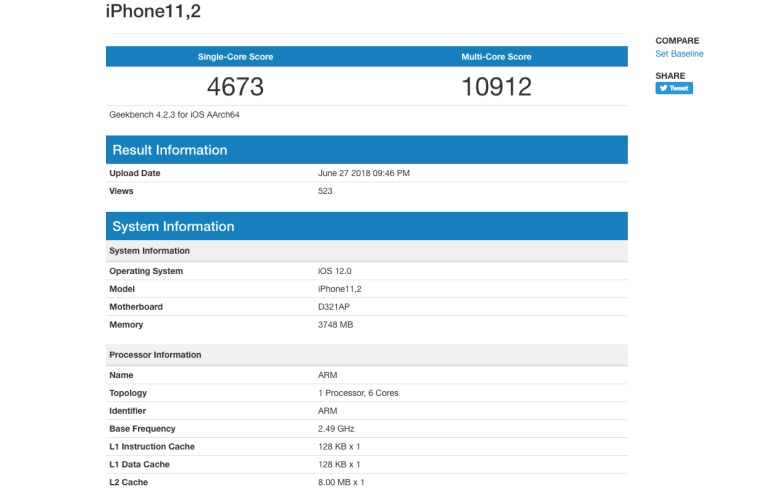 That’s only slightly better than what the iPhone X typically scores, which feels like a decent start. Keep in mind that iOS 12 is not yet optimized for a commercial rollout, and the same probably goes for a new ARM-based processor with 6 CPU cores clocked at up to 2.49 GHz.

Let’s all say hello to the TSMC-manufactured, Apple-designed A12 SoC, marginally improving on the 2.39 GHz top CPU clock rate of last year’s A11 Bionic.

But perhaps the most interesting revelation today is the 4GB RAM count of this apparent iPhone X successor. That’s not something Apple would usually advertise, but it could be a first for the iPhone family. The 8 packs a modest 2 gigs of memory, mind you, which the 8 Plus and X are able to upgrade to 3GB.

Of course, some Android high-enders nowadays come with as much as 8GB RAM, but iOS is known as a significantly less memory-hungry software platform. Unfortunately, the question remains – which of the three 2018 iPhones is this “11,2?”

We keep on getting amazing deals from Samsung and Amazon, where you will find the latest Galaxy Z Fold 2, M1 iPad Pro, and more on sale
YouTube 1.8M
Facebook 570K
Twitter 197K
Instagram 133K
RSS

In this article, we’ve combined all of the leaks and rumors to help you find out what…

In this rumor round-up, we've gathered all of the information we could find about the…