Soon may not be soon enough for impatient Galaxy S8 and S8+ owners, but the nightmare will probably end at last in a matter of days.

Can you believe it’s February already, and the world’s largest smartphone manufacturer is yet to update a single device in a single country with the latest version of the most popular operating system out there?

We’re talking the August 2017-released Android 8.0 Oreo iteration, and not necessarily the 8.1 build, as even Samsung’s newest flagship phones continue to run outdated Nougat software goodies. Officially, that is, with public beta testers in a number of markets treated to several rounds of experimental OS promotions on their Galaxy S8 and S8+ units.

Said beta program has recently come to an end worldwide, but stable Oreos are not rolling out to the masses anywhere just yet. It definitely shouldn’t be long now, and for what it’s worth, beta testers have apparently been promised distribution of the “official S/W version” 1 day earlier than everyone else as a reward for their help quashing bugs. 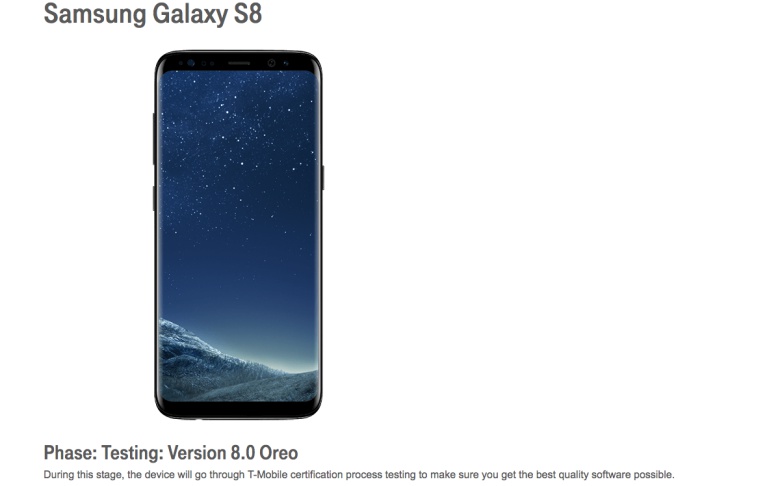 Meanwhile, T-Mobile seems to have discreetly altered the status of the Samsung Galaxy S8 and S8+ on the “Un-carrier’s” support webpages for software updates. Android 8.0 Oreo on both devices has progressed from the development to the testing stage, meaning the OEM’s work is done, and T-Mobile’s certification process is underway to “make sure you get the best quality software possible.”

Carrier testing could take anywhere from a couple of weeks to several months, so it’s still hard to say when Magenta’s S8-owning customers might receive their OTA updates. But as far as unlocked variants are concerned, it’s probably a matter of days now.