Android comes in many different forms, but one oft-requested feature is stock Android. Learn why Android OEM skins like Sense and TouchWiz are important.
Published 29 May 2013, 12:55 EDT

I have always valued the stock Android experience over the various customized strains from OEMs, even before Android itself looked anything like it does today – back in the Donut, Eclair, Froyo and Gingerbread days.

I like to use devices as they were intended to be used, how they were supposed to look and feel from the factory. This is exactly why I don’t use cases. They mask the true beauty, engineering mastery, the design, and all the hard work that went into making a phone. It’s like saying you want to protect a drawing your kid made by hanging it on the refrigerator in a manila envelope instead of a sheer plastic sleeve.

And to me, customized versions of Android from OEMs are sort of like that, except they’re not manila envelopes; manufacturer skins are more like drawing on top of the kid’s drawing to fix the errors and things they don’t like about everything that makes it the original drawing.

In short, custom builds are what Android make it so great, so flexible. And as terrible as that analogy may seem, they absolutely have a place in this world.

They’re simply not for me … or any other purist. Pure stock is the only way to use Android the way the creators intended. And just as I prefer to use my phones without cases, if possible, I like to run my Android devices stock. To date, I’ve owned somewhere in the ballpark of 50 smartphones (likely a lot more, if you count all the ones I’ve forgotten about). Of all the Android phones, I estimate that, at some point, I have flashed a stock build of Android to at least 95 percent of them. (The remaining five percent accounts for devices that either didn’t have huge development support or were locked down like Fort Knox and were too much trouble to fool with.)

Often – but not always – the experience after “going stock” is better. It feels less cumbersome, smoother, faster, more lightweight and … free. But it’s never perfect, at least not on devices that were never intended to be stock devices.

This year we’re seeing exactly why TouchWiz and Sense, although filled to the brim with features (read: bloat) we’ll never use or need, are necessary. They serve a purpose and make the hardware more impressive and less … standard.

By standard, I’m talking about devices like effectively every Nexus handset to date. The Nexus One was easily the most impressive Nexus in comparison to the other devices available at the time of its launch. From that point, the physical hardware and specifications became more mundane and less groundbreaking as Google focused its Nexus efforts more on the software experience than impressive hardware. The Nexus S, Galaxy Nexus, and Nexus 4 have all been great devices (that I have personally enjoyed … a ton). But there is nothing spectacular about them in terms of specs.

Take the Galaxy S 4 and HTC One, for example. The One has an UltraPixel camera, BoomSound front-facing speakers, and a wide angle front-facing camera. The Galaxy S 4 has top notch specifications, a 13-megapixel camera, microSD card slot, removable battery and more software features than anyone cares to count. And since the launch of these two smartphones, countless people have lamented far and wide, “I would get it [One or Galaxy S 4] if it had stock Android on it!”

But as that is finally becoming a reality, as a Google Edition Galaxy S 4 is on the horizon (as well as a possible Google Edition One), we’re learning just how important Sense and TouchWiz are to those specific phones.

The great cameras on the One and S 4 will become muddied by the stock software. And I know you’re thinking, “Taylor, how can you possibly know that?” Simple. Look at the camera quality on every Nexus handset to date.

You don’t realize how large of a role Samsung’s and HTC’s imaging software plays until you flash stock Android on a phone like the One. The UltraPixel camera with HTC’s touch is great, but after flashing CyanogenMod 10.1 to the phone, the camera is … okay. There is a lot more noise, even in well-lit pictures. And all the software features implemented by the two companies – Zoe, Drama Shot, Dual Camera, etc. – are missing from the mix. Instead, they use Google’s rather poorly implemented software.

All the great specifications in the world don’t make a phone better if it’s running generic software on hardware that warrants some optimization. The S 4 and One were built around the specific TouchWiz and Sense experiences. Had they originally been built as Nexus phones with Sense and TouchWiz added afterwards, the result would likely be very different.

BoomSound on the One may still be loud running CM 10.1, but it doesn’t technically have Beats Audio. We’re not complaining too much about that, but there’s noticeable clipping and distortion in the audio. This, of course, may be different and optimized with the Google Edition One. 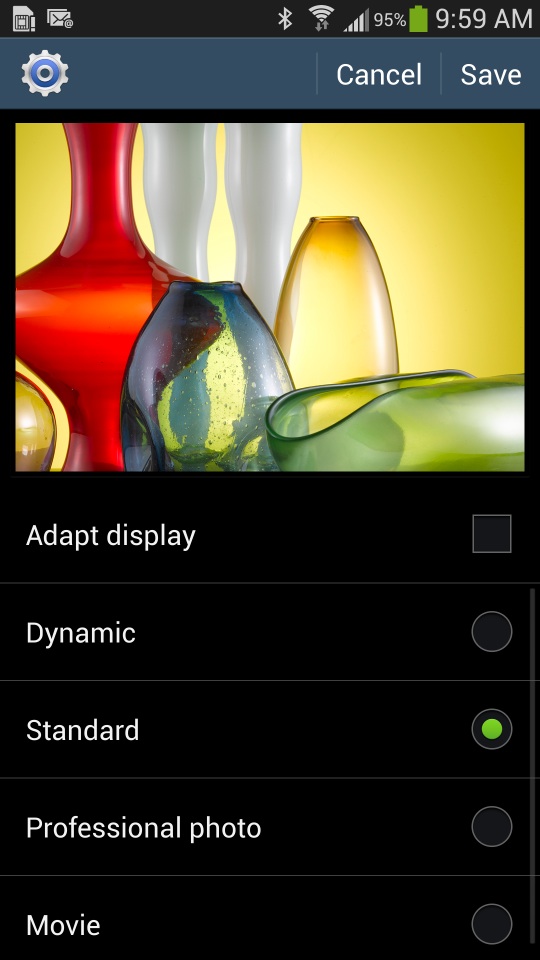 But the point stands. Take the Galaxy S 4’s display, for example. Super AMOLED is known for being super-saturated. A professional photographer friend of mine just upgraded to the Galaxy S 4. Yesterday, she made a comment to me about how saturated the display is, and how everything looks fake and overdone. I showed her that she could tweak the display settings by jumping into Settings and changing the Screen Mode to Professional Photo or Standard, and it would tone down the saturation.

Unless the Google Edition Galaxy S 4 comes with modified AOSP software (which, mind you, would defeat the entire purpose), this will not be possible.

As much as I rag on HTC and Samsung for mucking up the stock Android experience, there is a definite and clear purpose for Sense and TouchWiz. And it didn’t take a Google Edition Galaxy S 4 to realize this. I discovered this when I flashed CM 10.1 on the Galaxy Note II and went to take a picture at a concert beside a girl with a unmodified Galaxy Note II. Her pictures turned out decent. Mine were terrible. And I couldn’t take one usable picture of the two bands I’ve been dying to see for years.

It will be launching on May 20.