Here are a few Android networking tweaks to mitigate risks, improve your performance, and maybe even improve your battery life in the process!
Published 13 February 2015, 13:29 EST

By now it should be pretty clear that we’re all carrying around full-featured computers in our pockets. Just like the desktop and laptop computers that we’ve used for years, our mobile devices have the same features and functionality as their full-sized counterparts – sometimes even more: microphones, cameras, broadband Internet connections, and more.

One of the main areas of concern is that our smartphones and tablets are “always on” and “always connected” to the Internet. Combined, these present many threats that most users  may not even realize. Not to worry! Here are a few android networking tweaks to mitigate the risks, improve your performance, and maybe even improve your battery life in the process! 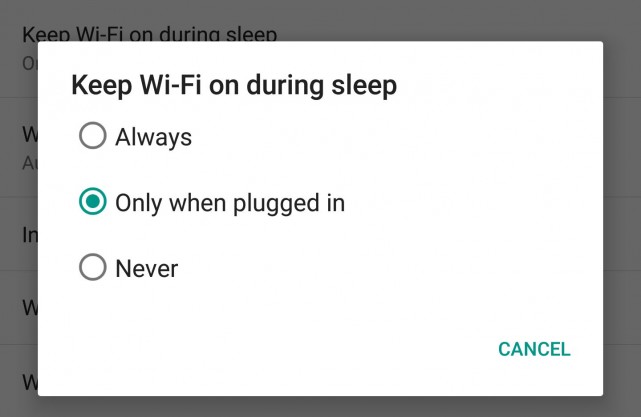 Wi-Fi, however, is an extra radio signal that your device has to babysit. Sending and receiving those signals takes power. To help your battery last longer, but still have speed when you need it, set your Wi-Fi to turn off while the device is sleeping.

Head over to your Wi-Fi settings, go to Advanced, and change the “Keep Wi-Fi on during sleep” setting to “Never” or “Only when plugged in”.

The previous tip encourages users to keep their Wi-Fi on whenever possible, but turn it off when you’re not using it (when the screen is off). This tip dovetails right in: keep your Wi-Fi turned off except in places that you’re going to use it.

Android uses Wi-Fi signals to help geo-locate you. Even if your Wi-Fi is turned off, Android will periodically turn it on for a moment to “see what’s around”, then turn Wi-Fi back off again. Well, that’s what’s supposed to happen. If you’ve got a saved Wi-Fi access point configured, but have Wi-Fi turned off (to save battery, etc.) when Google’s location service turn it on to scan for your location, in my experience your Wi-Fi will stay turned on because it’s connected to one of your saved Wi-Fi networks – even if you had Wi-Fi turned off on purpose (surfing employment sites while at your day job, for example). 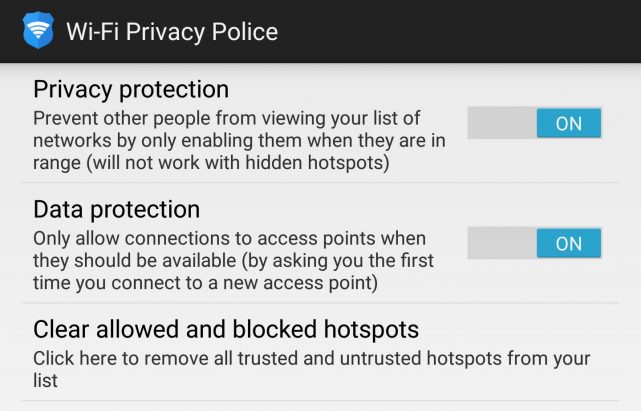 Additionally, your Wi-Fi “card” has a unique identifier built-in to it called a MAC address. This Media Access Code (sometimes erroneously referred to as “Machine Address Code”) is used to identify your device to the network to which it’s trying to connect. Those networks can then keep a log of when you were connected to which access point – enabling them to track your physical location.

There are several apps which help protect against this, Wi-Fi Privacy Police is the one I’m using now. According to the developer, this app prevents your smartphone from sending out the names of Wi-Fi networks it wants to connect to over the air. This makes sure that other people in your surroundings cannot see the networks you’ve connected to, and the places you’ve visited. If your smartphone encounters an unknown access point with a known name (for example, a malicious access point pretending to be your home network), it asks whether you trust this access point at that location before connecting. Despite being an extra app running in the background, it doesn’t seem to have any negative impact on your battery, rather, because you’re being more conservative with the information you’re broadcasting, your battery life may actually improve.

Your smartphone may have come with its own web browser. Head to the Play Store and download Chrome. This browser by Google ties in with the Chrome browser installed on your desktop or laptop to remember passwords, history, and more.While that’s very convenient, it’s not why I’m recommending using it. 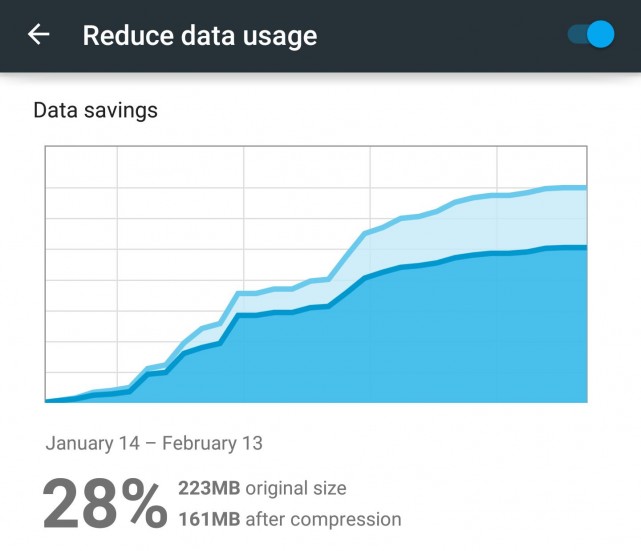 Chrome has two features built in that help with privacy and with speed (speed translates into lower data use, and better battery life). Open Chrome’s settings and check out the Privacy settings. Here you can turn on the “Do Not Track” feature. Respectable advertisers will look for this and respect your wishes not to be tracked across sites. Less respectable advertisers ignore it. Nonetheless, set the flag. Doing so will send a message to advertisers that you value your privacy. (Feel free to head to the comments to share why this is brilliant, or a complete waste of time.) While you’re there, you can set various Chrome privacy settings, to help keep your information from being sent to Google, too.

Speaking of Google, setting aside privacy completely, the other feature I want to highlight in Chrome basically makes Google your proxy, through which all your browsing traffic is sent – and compressed. Head back into Chrome’s settings and tap Reduce data usage. It’s probably “off” by default. If you turn it “on” all of the content you get through Chrome will pass through Google’s servers first. Yes, this is a privacy nightmare, but Google optimizes the HTML, CSS, Javascript, and even images before sending them down to your phone. The resulting web pages look and feel the same, but they load much faster, and use significantly less data. I’m saving 28% right now – the original sites would have been 223MB, but Google squeezed them down to 161MB.

Obviously that’s just a couple networking tweaks to help your Android perform better, faster, and safer. Now it’s your turn! Head down to the comments and let us know your favorite Android networking tip!

We start today’s deals with several Apple products, which feature the previous-generation iPad Pro, the iPhone 12, and more on sale

The Galaxy Tab A7 Lite is touted to pack a 5,100mAh battery. As per the renders, it will have a flash-less camera on its back.