How long until we see Multi Window in stock Android?

Read why we might (or might not) see Android multi-window support baked right in to the OS.
Published 17 December 2013, 10:35 EST

When we’re discussing the software that Android OEMs load on their phones, more often than not it feels like we end up with some sort of negative impression: either the changes feel unnecessary and force us to relearn how to do simple tasks, lag the phone down with little benefit to show for it, or are very “gimmicky” tricks that really don’t help us out that much in our day-to-day usage.

But it hasn’t all been a veritable wasteland; tucked away in one little niche we’ve seen one OEM really deliver. I’m talking about Samsung and its enhancements for phablets.

Say what you will about TouchWiz as a whole, but the tweaks Samsung brought to Note devices have really been its stand-out contributions – especially with more recent models. The one I want to talk about today has long since found its way to other form factors, but thanks to its debut on the Galaxy Note II, I still strongly associate it with Samsung’s phablets: the company’s Multi Window View mode.

I was just talking about MW last week when Skype released an update for Android tablets that offered a real nice-looking floating windows mode, and it came up a little earlier when we were discussing phablets on the Pocketnow Weekly.

Anyone who has used this feature seems to sing its praises, so I’ve got to wonder: how long will this sort of thing remain an OEM add-on, and when might we start seeing Google build some of this functionality into Android itself? 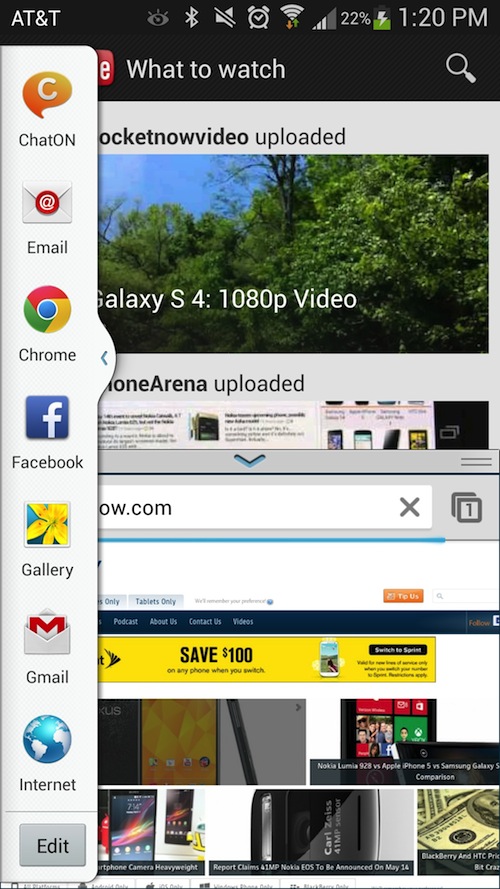 After all, windowed multitasking feels very natural to many users, raised on PCs, and with portable devices today offering more screen real estate and significantly higher resolutions than were available just a few years ago, it seems like the perfect time to start bringing a windowed mode to Android proper. So why don’t we have it?

Well, on the Weekly I offered the suggestion that compatibility could be a big issue; Samsung doesn’t let MW work with just any app, and the way it’s custom picked the software to support sure had me thinking that there must be a good reason for doing so. As it turns out, that’s not exactly the case, and hacks that grant users extensive control over the system, making it support whichever apps they choose, haven’t resulted in large swaths of users complaining about broken apps.

And honestly, it makes sense that a lot of apps would work like this with little issue; Android devices come in all shapes and sizes, so apps need to be flexible with how they draw things to the screen. Remember, not everything’s even the same screen shape, and apps that work on the widescreen display of your LG G2 need to work just as well on the 4:3 screen of the LG Vu. As this Multi Window mode basically means tricking an app into thinking it’s running on a smaller display than your phone actually has, that flexibility is key.

The problem is, you can only push things so far. An app that’s very text-and-UI-heavy – something like Twitter, or even Facebook – will likely handle odd screen sizes (and by extension, Multi Window) quite well. But ones that include a lot pre-rendered graphics – and I’m thinking certain games here – stand the risk of being a lot less flexible. And then you also have apps that demand to be used in a landscape orientation (or demand portrait) which just won’t play nicely with others.

I’m sure users will quickly realize the futility of such efforts – and I can’t imagine anyone wants to play Asphalt 8 while simultaneously looking for a restaurant on Yelp – but I still don’t think we can totally discount these cases where MW just doesn’t seem like it would work well. Android simply wasn’t designed to function like this, nor were the majority of its apps, and the fact that it works in MW as well as it does in most cases is a very lucky break. 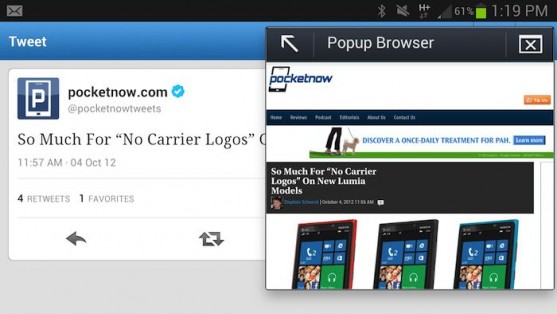 What I can’t see is Google taking that luck and touting it as a feature – not without doing a LOT of work to formalize such a mode, bring devs up to speed, and test it out the wazoo. A company like Samsung can get away with limited functionality, so long as things work with the company’s own apps. Google really doesn’t have that luxury, and introducing a feature that “mostly works” may prove to cause more harm than good – it can’t risk breaking anything in the process.

Because of that, I’m doubtful that we’ll ever see Google implement a universal MW mode. What we could get is a new API moving forward that allows apps to be designed with such support in mind. That would let Google avoid compatibility issues with existing apps entirely. So, does that mean this could happen?

I tell you: I’m just not sure. Part of me thinks that Google’s intentionally trying to make Android as un-PC-like as it can, and full-screen apps are a key part of that.

There are plenty of other issues to consider, as well. What about apps that are ad-supported? Is it fair to the devs behind such apps or the companies affiliated with the ad networks they use when all of a sudden you’re looking at tiny, shrunken-down versions of those ads, while simultaneously having your attention distracted by a second app? What about apps that take advantage of your phone’s sensors? When we’re all running full-screen, we know who gets priority, but how do we deal with that when multiple apps are vying for control?

My point is that there’s not one big issue keeping Multi Window from happening. Instead, there are a few clear problems, probably even more not-so-clear ones, and I’m just not sure that there’s necessarily a “best” way to approach this all. As a result, I wouldn’t bet on MW going mainstream anytime soon, though I still think such a development could one day be possible, should Google feel the proper motivation.