Our wishlist for Android M

What’s on our Android M wishlist? I polled the Pocketnow team to see what’s on their minds, keep on reading to find out what we’d like to see!

Marmalade? Mango? Mint Julep? Marshmallow? Meringue? Marzipan? Milk Chocolate? Moon Pie? M&M? Milky Way? Mars Bars? Milkshake? Though we may not know what the name of “Android M” will be once it starts showing up on smartphones, tablets, and wearables, we’re already putting our list of wants together. What’s on our Android M wishlist? I polled the Pocketnow team to see what’s on their minds, keep on reading to find out what we’d like to see!

To start with let’s hop in the wayback machine and look at one of my favorite features from the early CyanogenMod Custom ROMs: volume controls. There, each type of volume could be independently set, all from one screen with multiple sliders. Today, in Android L, Google et. al. have tried to implement an “Interruptions” paradigm that is supposed to control your volumes, vibrations, etc. “intelligently”.

With settings like “Show All”, “None”, “Priority Only”, “Show All”, and a “Theater Mode” (which is similar, but strangely not the same as the notifications controls), you’d think things would be pretty easy – but they’re not.

Someone do me a favor, cross-stitch this onto a pillow for me:

“They’ve GOT to fix the notification scheme. It currently takes way too many taps to go from silent to loud or vice versa, Priority takes too much thinking, and all of it is way clunkier than it used to be in KitKat. Also, you can’t change system notification volume while listening to a video or a podcast or a song, which is lame as eff.” – Michael Fisher

They say that as you get older the first thing that starts to go is your eyesight. I can’t remember what the second thing is.

Okay, lame jokes about memory loss aside, next on our list is better memory management. Android Lollipop tries really hard to do a good job at killing background tasks to keep what’s in the foreground nice and snappy. Whether or not that’s the way it actually works out seems to be hit or miss.

Now that our phones are coming with 2GB, 3GB, and even 4GB RAM, there’s absolutely no reason why we can’t keep a handful of running apps in RAM all the time. 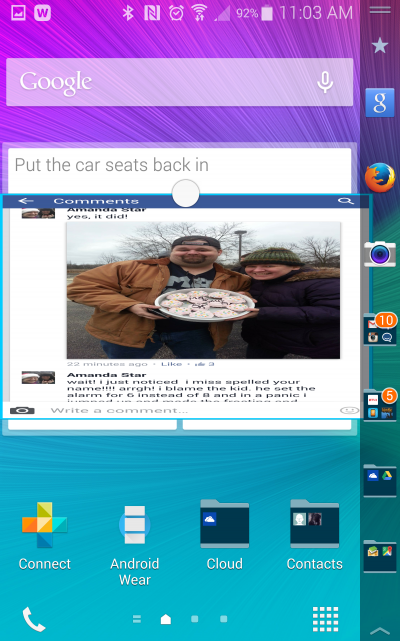 When our smartphones had itty bitty screen sizes and resolutions it made sense for us to only be able to have one thing open at any given time. Now with HD resolutions and screens pushing past 6-inches on phones (and even larger for tablets), often that screen space is wasted. Some OEMs have branched out, creating ways to show multiple apps on the screen at once. Microsoft calls this concept “Windows”, perhaps you’ve heard of it? It’s been around a while.

On Android “windows” have been implemented as floating boxes (in true “Windows” style), and as a split-screen docked to the top/bottom or one of the sides. Neither method is native to Android (yet), though some code-commits suggest the feature is almost complete, and sometimes it doesn’t work right in the OEM implementations.

Needless to say, the time for Multi-Window support to officially come to Android is long overdue. With Microsoft Continuum knocking down our door, it would be great it Android could beat Microsoft to the punch, letting us finally use our phones as desktop-computer replacements. To get to that point, Multi-Window support is the natural path to Multi-Monitor support. 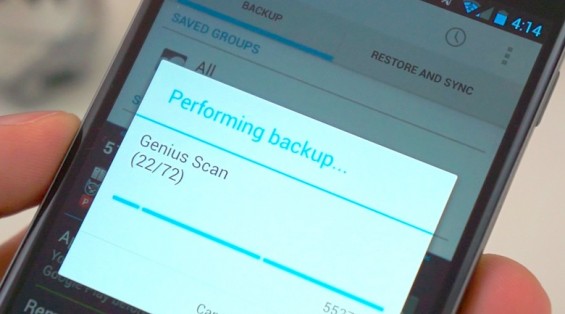 I’ve used all kinds of backup solutions for Android in the past. Some that run from inside the OS, some that you have to boot into a custom recovery image to use. With the advances that Android has made over the years, the only backup that I use is what comes baked in.

I reimage my phones and tablets a LOT! I use lots of different phones for reviews and other purposes. Needless to say, I’m the kind of guy that could benefit the most from being able to quickly restore a device to a previous state.

Instead, I wipe then flash, then tell Android to go ahead and restore my apps and settings. Google has made great strides with making setting up a new device easier.  It takes a little while as all this is downloaded over my WiFi connection, but once it’s done, all my apps are back in place. All my icons are right where I left them. Even my widgets and wallpapers are restored automatically.

The only thing left for me to do is re-input my credentials for Twitter, Facebook, Netflix, my bank and Gold Wallet apps, and a few others – yes, all that’s a pain, and yes I wish they’d all let me log in with Google, but it’s pretty quick. I can be completely “restored” in 30 minutes. Even still, Google needs to continue to improve the depth and breadth of backups in Android proper. 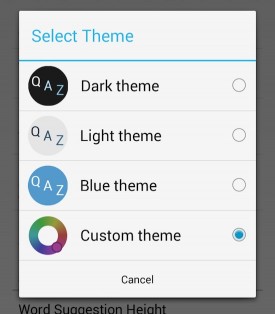 We all like to customize how our devices look and sound. OEMs are again leading the charge with theme engines that apply color schemes, wallpapers, sounds, fonts and more to their devices. Unfortunately, themes from one OEM aren’t compatible with themes from another.

Currently that space is filled with apps like Themer, but there’s only so much these types of apps can do, and honestly this should be part of the operating system, not something a third party developer has to put together – despite how well it’s done.

That covers what seems to be the common set of requests among the Pocketnow staff.  Here are a few thoughts from team that are worth a mention.

Dushyant would like to see one-handed use improved. With phablets being as popular as they are these days, the “thumb-stretch” is getting awfully difficult – even for those of us with big hands.

Adam Doud wants “smart links” to be opened as dedicated apps, rather than appearing to piggyback on the app that opened them. His example is when he opens a link to a geocache from his email, it opens in C:Geo, but C:Geo then appears in his email card in the task switcher, rather than in a separate C:Geo card. And while we’re talking cards, why not bring back the “dismiss all” or “close all” button to clean out everything in that ever-growing list?

Tony is fine with Android the way it is now, the only thing that really annoys him is how audio is handled (music, podcasts, etc.) when a notification comes in. This causes the audio to stop or the volume to “duck” (and sometimes not come back up). Different apps seem to do this differently, which is a bit more than annoying!

Lastly, we’ve got to ask sometime, so why not now? We know that the next version of Android is going to be codenamed “Android M” (just like “Android “L” before it) and that we’ll hear a lot about it at the upcoming Google I/O developer conference. What we don’t know (with any confidence) is what the “M” will stand for, though according to some reports the word “Milkshake” seems like it’s being heard more frequently around the Google campus these days than it has been in the past.

Go ahead and tell us what you think the name should be in our poll, then head down to the comments and let us know what’s on your Android M wishlist!

The Xperia L4 has a signature Sony design with a tall display and familiar UX, but the internals are a typical mid-range affair.