What better way to kick Google I/O week off than with a preview of the Android “L” release? That’s exactly what we have here, as the Chrome Issue Tracker has brought up Android L-release screenshots posted by a not-entirely-careful Google employee.

While these screenshots are likely of an early revision of the Android “L” (the name isn’t final, though speculation has ranged from “lollipop” to “lemon meringue pie”), it’s easy to see the different oft-rumored UI changes at play here.

While you can ponder the screenshots for yourself down below, there are a couple main things we’d like to point out. First off is the debugging icon, found in the top left. This is what proves to us that a version of Android not currently public is being pictured here, though that icon will likely change by the time the release of the Android revision comes around (as happened with KitKat/Key Lime Pie last year).

You can also see “Mr. Jingles,” of Google+ fame, in the notifications tray, probably to show that the phone is currently silenced. There are many other UI elements evolved from their current states, another of which includes a border around Chrome, showing the wallpaper through it. Could this be a glitch, or a fancy new multitasking feature? We’ll have to wait to know.

Another random note is that the shots below were grabbed from an LG Nexus 4 (we can tell because of the screen resolution) — congrats to that device, as it will likely have just grabbed itself a full two years of support.

As stated earlier, the only thing we can do to get this all verified is to wait. Check the shots out for yourself below to ponder and theorize in the meantime, though. 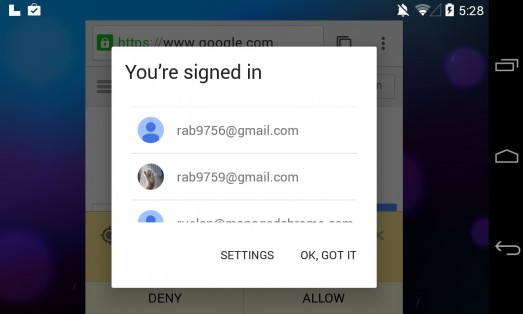 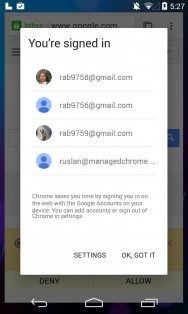 With hardware acceleration, the watch face you apply on your smartwatch will render at a higher frame rate, which means smoother transitions and animations.