Despite ‘difficulty to compete’ with iOS and Windows, Android tablets still reign supreme

Global tablet sales remain on a steep downward trajectory, with Android their OS champion, and Apple at the top of the manufacturer ranks in Q2 2016.
Published 01 August 2016, 10:54 EDT

It’s been obvious for a long time now that tablet vendors need to change their approach and adapt to new consumer requirements if they’re to survive and keep the market afloat. But “while growth in the detachable category is undeniable, slates continue to represent the vast majority of the segment.”

That’s one of IDC’s most interesting conclusions in compiling preliminary Q2 2016 global shipment data, and of course, finding Android the industry’s dominant force, with 65 percent sales share. Google and its faithful hardware-making partners have found it difficult of late to compete with iOS or Windows 2-in-1 products, but going forward, better multitasking support in 7.0 Nougat and tighter Chrome OS integration may help the platform status quo remain largely unchanged.

Between April and June 2016, iPads accounted for 26 percent of the ecosystem’s shipments, with Windows still a distant third, incapable of breaking double-digit share. 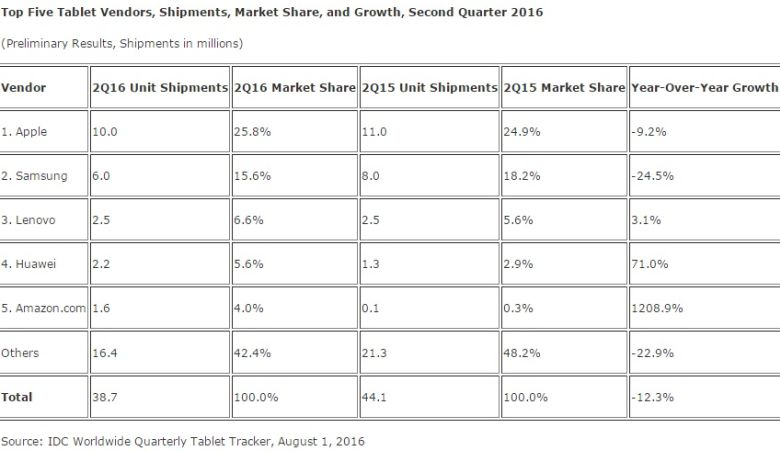 As far as manufacturers go, Apple slipped a million units year-on-year in sales, but gained nearly a percentage point in share, Samsung reported a somewhat worrying though not exactly massive decline in both categories, while Lenovo actually saw its numbers surge, thanks to “esoteric” designs, as well as super-low-cost Android models.

Huawei didn’t get off to a great start with the overpriced Matebook, Amazon turned the latest dirt-cheap Fires into instant hits, and all in all, tablet sales plunged for their seventh consecutive quarter, this time by 12.3 percent compared to Q2 2015, to only 38.7 million copies.