Android Guy Weekly: Everything You Need to Know About SD Cards

Many smartphones and tablets come with a microSD card slot as a means to expand their storage from their stock capacity up to an additional 32GB. There are many different sizes, form-factors, capacities,  and speeds to take into consideration. Not every variation works in all slots, so there are some things that you need to know before you head out and buy your card.

Way back in the day of PDAs, if you wanted to add some extra storage to your device you had a choice: MMC or SD. MMC cards were usually less expensive than SDcards, had fewer moving parts (they didn’t have a “Lock” switch), and were less bulky. Back then either card format worked in most card slots.

MMC and SD cards went different directions after their original incarnations, and the new versions are no longer compatible with one another. 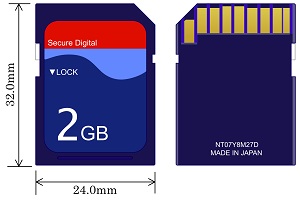 SDCards come in three different form-factors: standard, mini, and micro. SDcards are larger, microsd are the smallest, and mini’s are in the middle.

Cards officially known as “sdcards” are the original, standard sized cards. They are the preferred card size for many camcorders, digital cameras, and audio recorders.

In an effort to make PDAs and emerging smartphones smaller (and their components less expensive) the standard-sized sdcard was miniaturized and the new form-factor called “miniSD”. This format didn’t last very long, and was quickly replaced the even smaller microSD card.

MicroSD cards are the cards that most of us use today, and we refer to simply as “sdcards”. They’re very small (smaller than most phones SIM card) and can be easily lost. Most card slots are hidden either behind an access door or inside the battery compartment, or some other internal area of the device.

Both miniSD and microSD cards can be inserted into an adapter and used in a standard sdcard slot. You can even find adapters to make microSD cards readable in miniSD slots.

SDSC stands for “Standard Capacity”. Most people you ask will tell you that the biggest capacity you can find in a standard sdcard (SDSC)  is 2GB (version 1.0), although some 4GB (version 1.01) cards were produced.

SDHC stands for “High Capacity” and lifted the 2GB/4GB limit from sdcards and allowed for the memory up to 32GB to be be addressed. Although they have the same physical dimensions, SDHC cards cannot be written or read by SDSC only readers.

SDXC stands for “Extended Capacity” and allows for cards that address 32GB to 2TB of storage space. Although they have the same physical dimensions as the other two, SDXC cards cannot be written or read by SDSC or SDHC readers. 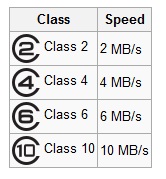 As pictures got bigger and video got higher definition it became necessary to begin identifying how fast data could be written to all these cards. A card that was “too slow” might drop frames from your video masterpiece or cause you to miss that all-important picture. To address this a “class”-based speed indicator was created.

These cards are inexpensive and are a good for music playback, and low-end pictures, but they’re not quick enough for today’s high-end tasks. If your card doesn’t have a “Class 2” symbol on it, it’s Class 2 or slower.

Class 4 cards are a good general purpose card for everything except rapid picture taking and HD video recording.

Class 10 cards can be used to just about anything, including 1080PO full HD video

Currently, UHS-II is just a specification, with no cards available which support it. The spec calls for a theoretical maximum transfer speed of 312 MB/s.