Technically out tomorrow as part of Android 8.1, Android Oreo (Go edition) or just Android Go still needs hardware manufacturers to get on board.
Published 05 December 2017, 03:59 EST

In addition to reviving and expanding the Android One program, both to new regions and higher price tiers, Google unveiled plans not that long ago to also inaugurate another platform primarily aimed at cash-strapped users in emerging markets.

The Android Go initiative missed the original launch window of the operating system’s Oreo flavor, finally seeing daylight tomorrow alongside Android 8.1. You won’t be able to actually install this on a Pixel or other phones just yet, though Google is vowing “entry-level devices around the world” will get the “new release” in the “coming months.”

Unlike Android One products however, Go phones won’t need to be individually vetted by the search giant, which means the storage and data-optimized platform should grow a lot faster, at least in theory.

The main idea behind Android Oreo (Go edition) is as simple as it is brilliant, with three key components focused on making ultra-low-end devices “fully functioning smartphones that can browse the web and use apps” as effortlessly as possible. 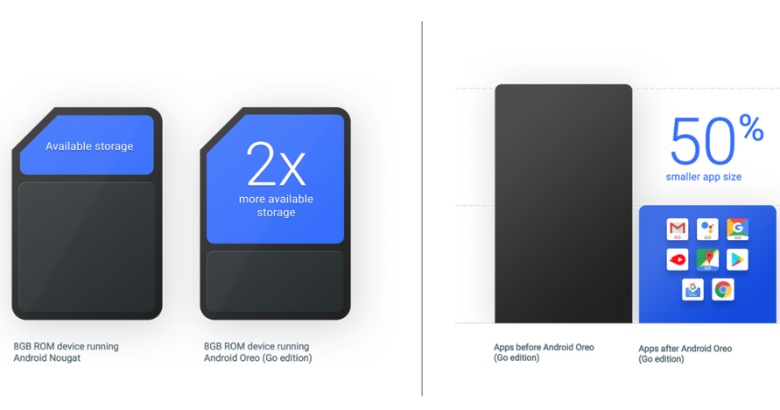 The actual OS includes a number of built-in performance improvements, data management features and security benefits, while all those pre-installed Google apps are “designed to be lighter and relevant to the unique needs of people who are coming online for the first time.” Last but not least, future Android Go users will get access to a “tuned” version of the Play Store allowing them to download any standard app while highlighting titles especially optimized to save storage and data.

Obviously, third-party developers will be essential to the project’s long-term progress, although “Lite” versions of Facebook, Messenger, Twitter or Skype are already making life easier for owners of 512MB RAM/8GB ROM-packing devices.

They are clearly the target audience of Google’s latest mobile software initiative, particularly in countries like India, where Android usage has surged recently to exceed US smartphone ownership.