Marshmallow more than doubled its Android distribution share in the past month, but aside from Froyo, everyOS flavor in use still beats 6.0.
Published 09 December 2015, 05:17 EST

It’s that time of the month again. The time Android devotees are reminded of the ecosystem’s greatest weakness, pining for iOS 9’s “sluggish” rise to 70 percent adoption rate in less than three months.

0.5 percent market share is certainly a microscopic number, but our Big G-loving readers can always look on the bright side. At least the trend is favorable… enough, and Marshmallow more than doubled its adoption since early November.

Froyo is significantly left behind too, if it’s any consolation, while every other Android version on the map comfortably trumps M, including ancient Gingerbread and Ice Cream Sandwich. For the first time ever, Jelly Bean falls behind Lollipop, and the latter is officially the second most popular software build around, after KitKat. 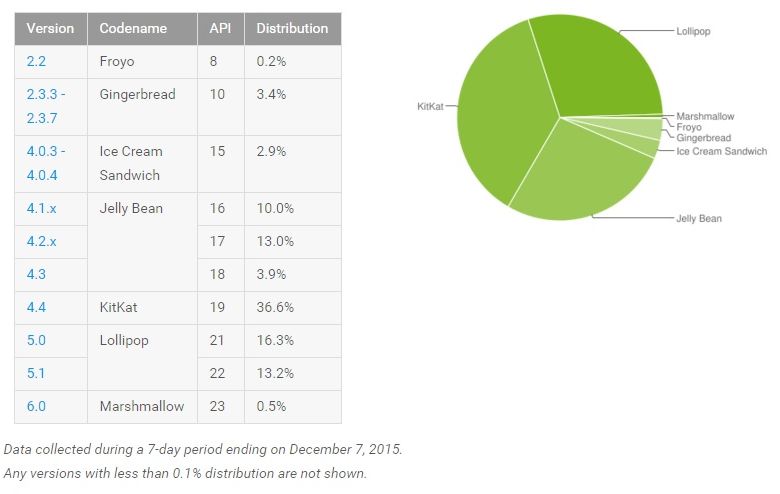 Android 5.0 and 5.1’s combined figures stand relatively tall at 29.5 percent, still more than 7 points behind 4.4, but also 2.6 ahead of the 4.1 + 4.2 + 4.3 total. Overall, this looks like the textbook definition of a deeply fragmented mobile environment, and as 6.0 will continue to slowly surge, things should only get worse.

Think about it, in a few months, we’ll have no less than four major Android renditions at double-digit numbers, given Jelly Bean will probably not drop fast enough, let alone KitKat, which is bound to lead the ranks a while longer.

The update will bring pop-out conversation windows, call button for messages, and support for text recognition in images.