Google acknowledges the benefits of Dark Mode on battery life

Google has started talking more and more about Dark Mode and the benefits that it brings in terms of prolonging battery life.
Published 09 November 2018, 01:00 EST

We know the advantages of OLED screens. Aside from richer colors and contrast — which some of you might prefer, some of you might not — it’s all about power consumption. When an OLED screen displays black, it doesn’t really display anything. We’re talking about true black, and it has been proven time and time again that it takes little to no power for an OLED screen to display black. This, opposed to white, where power consumption is close to maximum. This is something Google reiterated during its Android Dev Summit this week. 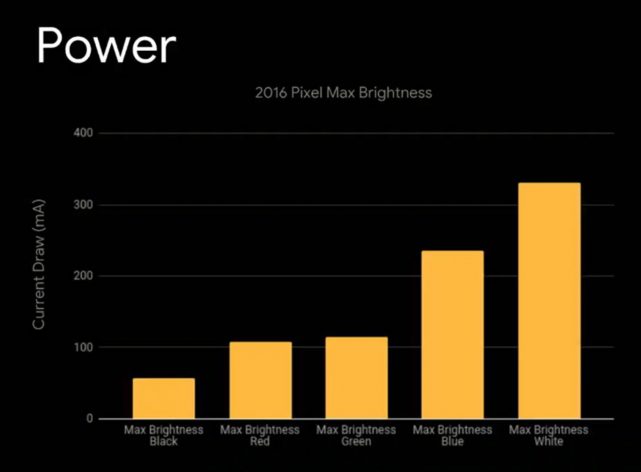 As you can see in the chart above, using white at the same brightness levels consumes several times more power than displaying black. Google has acknowledged this, and the fact that its design language that is mainly focused on white is not ideal for preserving or prolonging battery life.

While a system-wide dark mode on Android is not yet available, Google is slowly adding dark colors to some of its apps and parts of the system. YouTube already has a dark mode, and so does Messages. A dark mode phone app is being tested, and so is one for the Google Feed.

It’s a great thing for Google to recognize this fact. However, it’s a long way from here to having the system-wide option (or even the option in all apps) to go dark. But by acknowledging the issue, we can at least hope that options will become available when they make sense. After all, the power saving is huge, as the chart below shows. 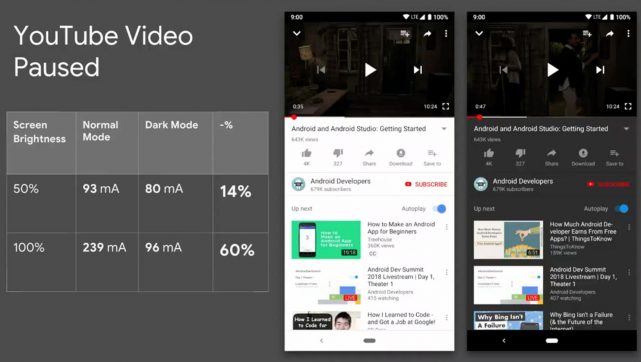 Microsoft has announced the price and shipping date of its Surface Duo.