It comes as no surprise that the Moto Z2 Force is the company’s first phone officially updated to Android 8.0 Oreo. But it’s a little unexpected to see Verizon lead the way.

Well, here’s a nice, unexpected, last-minute Christmas gift for Verizon subscribers rocking Lenovorola’s most powerful modular smartphone yet. The Z2 Force is predictably the Chinese company’s first Moto-branded product treated to an Oreo UI makeover, although following soak tests in Brazil, no one could have anticipated an official update start in the US.

Unlike the original Z Force, the Moto Z2 Force is available from all of the nation’s big four wireless service providers, so the OG’s exclusive carrier partner has managed to beat its three rivals to the Android 8.0 punch for the second-gen model.

Technically, we haven’t been able to confirm the rollout just yet, as Motorola and Big Red remain silent on their official websites and social media channels. But a bunch of screenshots on various forums offer all the proof we need to believe this story and take it seriously. 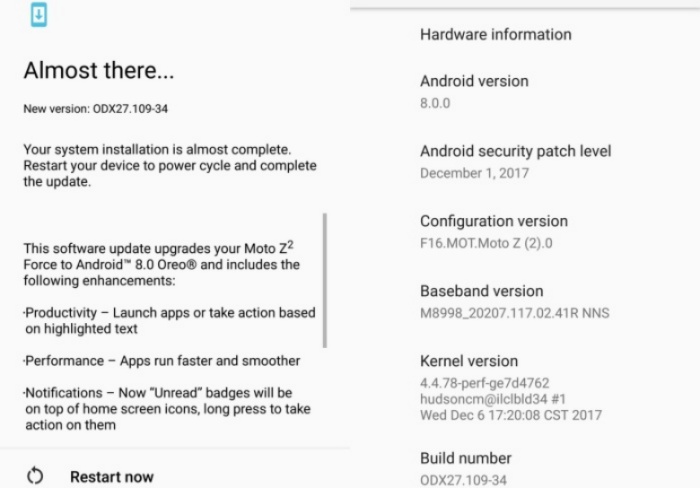 It’s probably not a drill, mind you, given how few Moto Z2 Force units are out there, and the relatively large number of user confirmations on Reddit, the Motorola Community pages, and at XDA already.

As always, it might take a couple of days for the update to spread nationwide, and then hopefully reach other networks, regions and even other phones in the not-too-distant future. For now, make sure you have enough free storage space for Oreo’s installation, and get ready to embrace a massive slate of productivity, performance, usability and security enhancements.

Instead of adding participants one by one, WhatsApp users can now select all group call members in one go before starting the group voice or video call.