The name was revealed just after 2:45pm Eastern in New York with a statuette and a heroic animated introduction to the iteration’s mascot.
Published 21 August 2017, 15:00 EDT

“Safer. Smarter. More powerful. And sweeter than ever.”

In a slipshod livestream event, Android 8.0 Oreo was revealed at the 14th Street Park in New York. A statue featuring the Android robot in a hybrid green and white trim with an Oreo cookie as its body and another as a “cape.” Expect to see more of this icon in the near future. 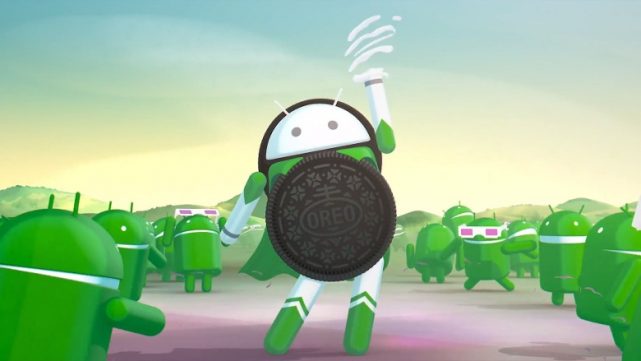 Android Oreo comes with what has been teased all along: better background activity limiting, halved boot times for the Google Pixel, more versatile autofill, a picture-in-picture mode and other features. Most importantly, the Unicode 10 emoji set and the new Android emoji design have been implemented.

As of this post, no official factory nor OTA images have been published for this software grade. Going by last year’s mark, the Pixel and Pixel XL are expected to get it first during the course of the week.

[alert variation=”alert-warning”]Update (3:15pm ET): Google’s blog, The Keyword, announces the following: [blockquote]We’re pushing the sources to Android Open Source Project (AOSP) for everyone to access today. Pixel and Nexus 5X/6P builds have entered carrier testing, and we expect to start rolling out in phases soon, alongside Pixel C and Nexus Player. We’ve also been working closely with our partners, and by the end of this year, hardware makers including Essential, General Mobile, HMD Global Home of Nokia Phones, Huawei, HTC, Kyocera, LG, Motorola, Samsung, Sharp and Sony are scheduled to launch or upgrade devices to Android 8.0 Oreo. Any devices enrolled in the Android Beta Program will also receive this final version. You can learn more at android.com/oreo.[/blockquote][/alert] [alert variation=”alert-warning”]Update 2 (3:50pm ET): Our colleague from XDA-Developers TK Bay has received his update.

#android #oreo #update is being pushed out now, to a @google #Pixel near you.

The developer has not revealed as to why exactly the controversial app was kicked off the Google Play Store after clocking over a million downloads.

It will be available for purchase through Amazon, Flipkart, Amazfit site, and Myntra as well as offline stores such as Croma, Reliance Digital, and Poorvika Mobiles.
YouTube 1.8M
Facebook 569K
Twitter 196K
Instagram 133K
RSS