Android 7.0 Nougat can be manually installed on unlocked US Galaxy S7 Edge, still no love for standard S7

An excruciatingly long wait is over for owners of officially unlocked Samsung Galaxy S7 Edge phones stateside, as Android 7.0 Nougat is now available.

Put your pitchforks down and blow out those torches, unlocked Galaxy S7 Edge users stateside, as Samsung is finally doing what it should have done many months ago, spreading the Android Nougat love. Well, kind of.

Technically, the SM-G935U can be updated to OS build 7.0, but the software makeover isn’t available OTA just yet. Instead, you’ll need to make a (minimal) extra effort, and pull the goodie pack manually using the smartphone manufacturer’s Smart Switch PC tool.

The thing is pretty massive, mind you, tipping the scales at more than 2.2GB, and including extra-sweet stuff like a “new UX and various performance modes”, improved usability of the Multi window, improved setting menu and AOD feature, addition of Samsung Pass, and last but not least, April security patches. 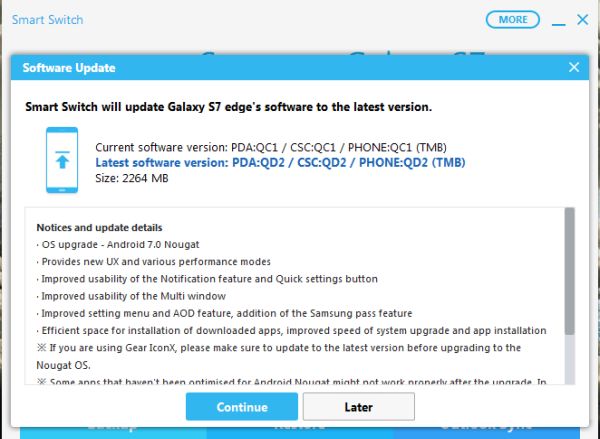 Unfortunately, the “regular” US unlocked Galaxy S7 (SM-G930U) continues to be kept waiting, as Samsung’s Mobile Security Technologies public communication team confirms in emails sent out to disgruntled customers what sounded like a goof back in August 2016. Namely, that the OEM requires “approval from all major carriers” for some reason to release OS upgrades for unlocked GS7 devices.

In this particular case, Samsung apparently “tried very hard to start rolling out N OS upgrade within April”, but an unnamed operator held off its blessing. Until “this week”, the company hopes, once again apologizing and asking for people’s understanding that “we are doing our best for quick release.” Good one!