When will Android support 64-bit chips?

Apple’s flagship smartphone and OS just got 64-bit support, which begs the question: when will Android support 64-bit chips?

We’ve already talked about the advantages and disadvantages of 64-bit versus 32-bit when it comes to smartphones and tablets. To recap, 64-bit should be faster and enable the inclusion of more RAM as compared to 32-bit, but the OS and apps will need some fairly heavy work before they’ll be able to take advantage of the advancements. Due to that, processor manufactures, app developers, and OS authors find themselves in the classic “chicken or the egg” conundrum: you can’t have one without the other. So given the paradox, when will Android support 64-bit chips?

Apple now has a 64-bit product (both hardware and software) with the iPhone 5S and iOS 7. The operating system, drivers, and core apps run in 64-bit mode, but apps that haven’t been redeployed with the necessary 64-bit modifications will run in 32-bit mode, which is fine. They’ll run every bit as fast and as well as they did on the older, 32-bit architecture. In fact, they’ll probably run better because other apps will be able to run quicker on the 64-bit side. This is essentially the same path Microsoft and PC chip makers took with desktop computers and OSes not that long ago, so it shouldn’t come as much of a surprise to anyone.

Or so you’d think

Qualcomm, for example, is a chip maker. You may have heard of the company. It makes the Snapdragon SoCs that power many of today’s high-end smartphones and tablets . You’d think that a company that makes and sells processors would be very interested in switching over to 64-bit. Why? So it can sell everyone who has a 32-bit processor a brand new 64-bit processor. Apparently that’s not the case.

Qualcomm’s senior vice president and chief marketing officer Anand Chandrasekher doesn’t think too highly of 64-bit chips. While talking about the 64-bit A7 chip from Apple, he said:

“I think they are doing a marketing gimmick. There’s zero benefit a consumer gets from that.”

Zero benefit. Zero. None. Not even a little.

So does Intel. According to information provided at a recent developer’s conference, 64-bit is on Intel’s map.  Its current Bay Trail Atom chips are already certified as “Intel 64” chips.

So does Samsung. According to co-CEO, Shin Jong-kyun, 64-bit devices from Samsung should be available “soon”. How soon? “Not in the shortest time. But yes, our next smartphones will have 64-bit processing functionality.” I suspect next year’s Galaxy S 5 or Note 4 (or both) will be 64-bit. 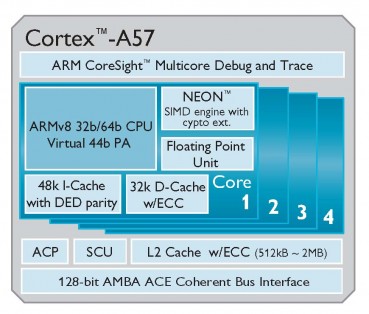 Since the vast majority of Androids are powered by processors based on ARM, how close is ARM to having a 64-bit reference design ready to build upon? The ARMv8 architecture introduced 64-bit support while maintaining compatibility with existing 32-bit software. ARM has already announced that its Cortex-A53 and Cortex-A57 chips will support 64-bit.

Who bases their chips off ARM’s models? Apple, Nvidia, Samsung, and even — wait for it — Qualcomm. Apple has beat everyone else to the punch by building their A7, which uses the ARMv8 archetecture, which is 64-bit. Whether Qualcomm likes it or not, 64-bit is coming.

Getting Android ready for 64-bit is going to take a long time, isn’t it? Not according to Linux Foundation Executive Director Jim Zemlin:

“[64-bit is already] done in Linux, has been done for a long time. The Android ecosystem just picks that up by default, they don’t have to go through any special development process to do that.”

Google could very well surprise us with 64-bit support when Android 4.4 KitKat is officially released. Then again, Google might wait for Android 5.0 and the next Nexus tablet.

Some might think waiting could be a problem from Google as well as any smartphone or tablet powered by Android. I don’t think so. Remember that Linux is already 64-bit capable, and Android is based on Linux. Android uses a virtual machine in which apps are run, so only the Dalvik VM will need to be updated to 64-bit. Existing apps aren’t likely going to need any changes at all.

The bigger message may be that whenever Android is 64-bit and has devices which will run it, every single app will already be compatible with it, and will run in 64-bit. It may take years before all the apps in Apple’s store are converted to run in 64-bit… if at all.