Here’s what Android 4.4 could bring

Google’s next version of Android should be just around the corner. What new features & changes will it bring? Here are some of our Android 4.4 speculations.

Apple just released iOS 7 (which what some would say includes “heavy hints of Android”) and we all suspect that Google is nearing the release of the next version of its OS: Android 4.4 KitKat. As such, everyone is busying trying to guess what Google could have in store for us, and what we might see when KitKat comes to our phones. To that end, we’ve been busy scratching our heads, and asking ourselves, if we were Google, what would we put into the next version of Android? What new features and changes will it bring? Here are some of our Android 4.4 speculations.

Improvements “under the hood” are expected, including the possible support of 64-bit hardware, but the part most people are interested in is the user experience — after all, it’s what you see and interact with every time you turn on your smartphone or tablet. We’ve talked before about the possibility of a card-based UI before. All sorts of information would be gathered together into convenient (and standard) “cards”. Recent updates to core Google apps hint that “cards” are here to stay, and are going to be coming to more areas of the OS soon. 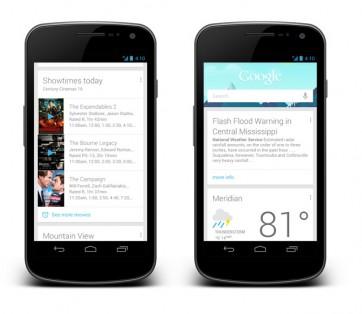 We’re not alone in this thought. Craig Tuttle put together a concept video of what he thinks the next iteration of Android might look like.

“When I sat down to figure out where Android had a chance of heading, I started by asking the question ‘Where does Google and the Android team seem excited to move?’.”

Google is an information company. They provide data about movies, weather, stock quotes, search results, contact information, calendar services, and so much more. It all boils down to information. One of the major hurdles is finding relevant information, but Google does that behind-the-scenes on their servers. The other challenge is formatting that information in a manner that is quickly and easily understandable by a huge cross-section of the world’s population.

The “index card” has come to our rescue again. People have been using these cards for all sorts of things for a very long time. We use them to find books, study for exams, to hold recipes, to organize our music collections — well, we did until they went all digital. Ah! But there it is! We used cards to organize our analog lives. They worked very well. They held just the right information, without overloading us with too much miscellanea, but provided us with where we could go to find more information if we wanted.

Now that our lives are digital, it makes sense that Google would carry over the ubiquitous analog index card into the digital realm.

There’s no way we can “live” inside one app. We’ve got to be able to easily and quickly change between applications. Looking up movies with Google Now and chatting with your friends on Facebook, or texting your significant other requires hopping between apps. All that has to be seamless. Tuttle sees Google reworking the multi-tasking stack to incorporate the “card” metaphor more fully, and to help switch between tasks a lost more fluidly than we can now.

Google Now is a great concept, but in my opinion it’s very poorly implemented. If you want to get at the vast array of information that Google Now can provide, you’ve got to open an app. Sure, Google tried to bring this information to your homescreen through a widget, but that still needs work.

Google Now is starting to branch out into other parts of your user experience. For example, calendar events will be presented to you in your notification shade when you need to leave for the meeting, taking into consideration weather, traffic, and other variables to make sure you get there on time.

There’s so much more that Google Now does, but doesn’t yet “integrate” into your overall user experience.

“The answer seemed obvious: information magically delivered without the user even having to ask for it. … When a new text comes in, Android analyzes it and brings up relevant information. A friend asks if you want to see The Hobbit at 7pm and Android automatically adds this time to your calendar if you reply ‘yes’. It’s these tiny optimizations that would make an OS and life so much simpler.”

Tuttle has put everything into a video to illustrate his ideas. It’s so well done that it looks like it could have come right from Google’s KitKat announcement presentation. One item of note, when Tuttle started working on his video, most of us suspected that the next version of Android was going to be 5.0 and named Key Lime Pie. Rather than remake his movie, he left the references to 5.0 in place, with a nice little change at the end. Take a look, I think you’ll be impressed. Once you have, head down to the comments and let us know how you think Google could leverage the card metaphor as well as the information inside Google Now more fully. What are your Android 4.4 speculations?