Despite Google not announcing it at I/O 2013, it’s been clear that Android 4.3 has been under development, leaving many of us wondering just when Google might hope to finally make it official. While most of the 4.3 evidence has come from the likes of server logs, today we get a first-hand look at the software in action, with a number of images appearing to show Android 4.3 running on a Nexus 4.

Supposedly snapped at a Thai mobile expo, these shots show Android 4.3 build JWR45B in action, prepared just a little earlier this month. We don’t get anything close to an exhaustive look at the phone, limiting what changes we can spot, but there’s definitely some new stuff going on with the phone’s camera app. Instead of controls appearing in a ring when you tap-to-focus, they’re now grouped around the shutter button.

Problem is, none of this puts us any closer to nailing-down Google’s Android 4.3 launch plans. Is what we heard about a June launch, alongside the white Nexus 4 accurate? Will we have to wait until some in the second half of the year? For now, the ball’s in Google’s court. 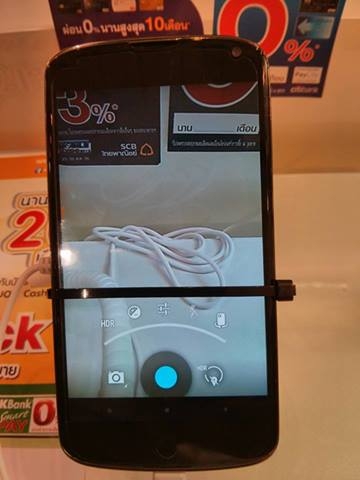