Amazon’s got a hit-and-miss record when it comes to hardware, and for every Kindle, there also seems to be a Fire Phone. Lately, though, the company’s been finding some solid success, with winners like it super-affordable $50 Fire tablet and the surprise hit that the Echo smart appliance has become. Could Amazon take what it learned from that new Fire tablet and apply it to the Echo to make it even more successful – that is, give us something that’s smaller and cheaper? Back in January we heard rumors that the company was working on some sort of Echo Mini, and today we’re getting just that – only instead of one device, it’s two, with the launch of the Echo Dot and Amazon Tap.

The Echo Dot (above), as its name implies, is the more direct Echo descendant. It has the same Alexa-powered voice control, as well as the same ability to control smart-home devices. Heck, it just looks like the full-sized Echo. Really, the biggest difference we’re seeing is that it lacks a big room-filling speaker. There’s still a speaker on board, granted, but Amazon’s clear that you’ll want to pair this with a larger speaker to get the most out of its audio output – either over Bluetooth or with its auxiliary output jack. And like its big brother Echo, it’s a corded device.

Amazon Tap (below), on the other hand, is wireless first and foremost. Amazon’s billing it as a portable Bluetooth speaker, but it’s still got some of Echo’s smarts, with the same Alexa voice support – the only problem here is that without its own cellular radio, you’re going to have to connect it to a hotspot for that to work. You also miss out on the home-control features, but for a mobile-first device, we can hardly fault Amazon for that. It charges with its own convenient cradle base and should offer nine hours of playback on a full battery. And where WiFi’s around it can even stream popular services like Spotify and Pandora directly – no connected phone needed.

The Echo Dot sells for just about $90, and right now sales are going to be limited to Prime members only. Amazon Tap, on the other hand, is available for anyone to buy, though right now it’s only open for pre-orders, with shipments going out at the end of the month. It’ll cost you just under $130. 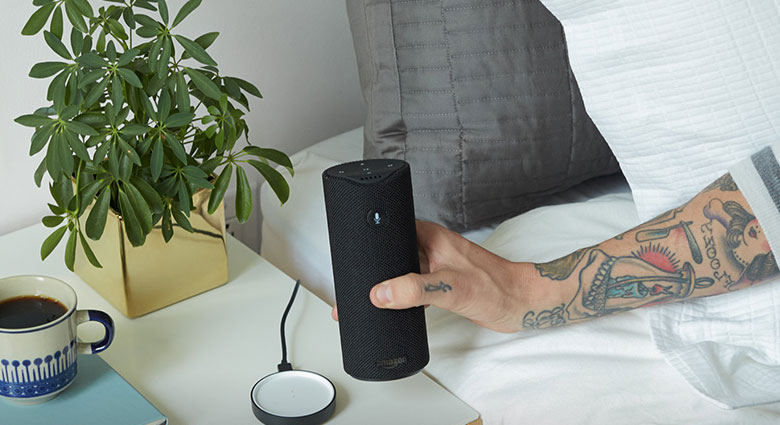