Get the details on the Amazon Fire tablet power adapter recall for the UK and Ireland, and see if your tablet’s affected.
Published 02 March 2016, 09:58 EST

It should be so straightforward: power comes from one place, and then a cable helps move it somewhere else. Heck, designing and building cables has been the backbone of the electronics industry going back over a century. So why does it seem so darn hard to get it right? Over the past few months, we’ve seen a surprising number of product recalls related to power cabling, as Apple, Microsoft, and Apple again found themselves sounding the warning call over cables and adapters that in some cases would just stop working, or at the worst could present the opportunity for a fire hazard. Now Amazon is joining this unfortunate club, as it announces its own recall for power adapters sold with select Kindle Fire tablets.

The models we’re talking about are the super-affordable seven-inch Fire tablet and the slightly-more-rugged Fire Kids Edition – Fire HD and Fire HDX tablets are in the clear. We’re also only looking at tablets that were sold in the UK and Ireland, as the power adapter in question is exclusive to the outlet layout used in those nations.

If you’re reading all that and thinking, “this sounds a lot like a tablet I bought,” go ahead and check the model number printed on the face of your power adapter: if it reads FABK7B, you’ve got the adapter being recalled.

From there, you’ve got two options: either Amazon will let you order a new power adapter for free, or you can get a 12 GBP credit issued to your account, and go buy a power adapter of your own choosing elsewhere. Since the adapter is a basic USB wall plug, you’ve got plenty of options for where else to turn.

As for the failure mode itself, all Amazon is saying is that the adapter poses a risk of electric shock – no one’s saying anything about overheating or possible fire risk. Still, we’re glad to know that Amazon is covering its bases, and taking care of this problem all the same. 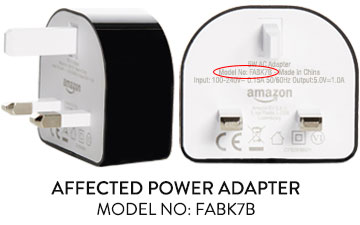