We just went hands-on with the Amazon Fire Phone at an AT&T press event. Click on through for our firsthand take on Dynamic Perspective, Firefly and more!
Published 17 July 2014, 17:11 EDT

AT&T was kind enough to host us at a hands-on event in NYC last night, and of all the things we came away with, one of the biggest was a renewed appreciation for what a crazy-busy review season it’s been. We’d already reviewed almost every single one of the devices AT&T had on display, from wearables like the LG G Watch to affordable smartphones like HTC’s Desire 610 to outliers like the not-quite-so-durable Samsung Galaxy S5 Active.

Standing apart from these devices, though, was the holy grail of the event: thanks more to its rarity than any one distinctive feature, the Amazon Fire Phone was the novelty of the night, with a wait list that stretched into the hours by evening’s end. Amazon was offering ten-minute glimpses of its lone demo device in a guided hands-on format, but sadly (and strangely) no video recording was permitted despite the phone being less than a week from shipping. The venue’s lighting also left something to be desired, so we’ve augmented our handful of photos with contributions from Alex Omoniyi of Booredatwork, who was kind enough to share some of the pictures he shot alongside us.

We still have significant concerns regarding the Fire Phone’s pricing and availability, which we’ll discuss further when it comes time for our full review in a few weeks. But last night’s encounter gave us our first in-person exposure to Amazon’s inaugural smartphone, and we have a few thoughts from our fleeting time with the Nexus 4 lookalike.

It feels as minimal as it looks

Depending on how it’s used, the term “minimalism” can serve either as a compliment or a masked yawn when it comes to smartphone design … and here, it’s probably closer to the latter.

To be sure, there’s nothing really wrong with the Fire Phone: its Gorilla Glass 3 front and back panels lend it a typically glossy and expensive feel, while the rubberized polyurethane border joining them gives it some needed grip in the hand (and a slight degree of bouncy shock absorption if it’s dropped). But we’ve seen all that before, most notably in the Nexus 4 that the all-black Fire Phone most closely resembles. In fact, were it not for the small home key below the display and the four tiny camera lenses dotting its corners, we’d have a hard time telling this device from any other generic Android smartphone at a glance.

Those four cameras enable the most interesting of the Fire Phone’s features – and the one most difficult to capture on camera. Amazon’s Dynamic Perspective isn’t just another tired take on the concept of a 3D smartphone screen, with headache-inducing blur and crappy resolution. Instead, the phone constantly tracks your face with the front-facing cameras and adjusts its display perspective accordingly, using any two cameras at a time (so even if you cover one or two lenses with your fingers, the feature still works flawlessly).

The phone is smart enough to know when it’s been passed from one person to another, and it won’t be fooled even if someone’s watching over your shoulder: the screen reliably and consistently delivered a wild 3D ride during the entirety of our demo period. It feels like something more futuristic than just a smartphone display: looking at images on the Fire Phone feels like peering into another world through a handheld portal. (We’d call it the Iconian Phone if we thought more than ten people would get the joke.) Combined with gesture-driven controls like “flicking” the device in the hand to access pop-out menus and rotating it to scroll through a webpage in the browser, Dynamic Perspective almost single-handedly makes the Fire Phone one of the more interesting devices we’ve held in the past year. 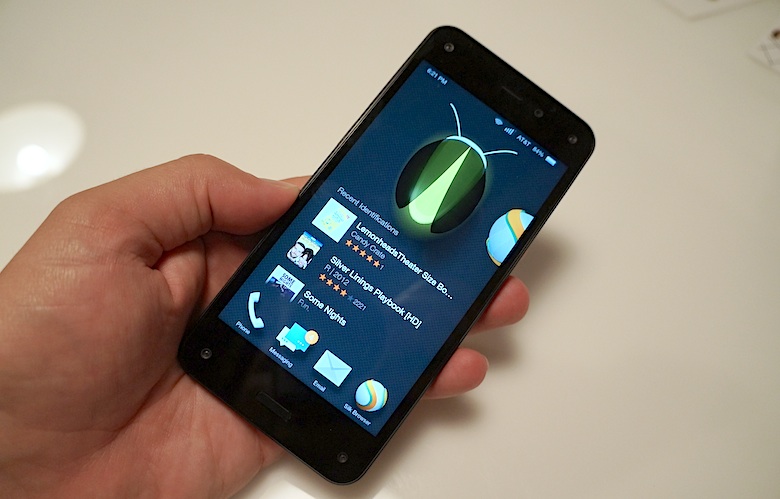 Unfortunately, some of that added perspective shows off corners of the software better left hidden. Amazon’s Fire OS isn’t ugly per se, but it sure isn’t pretty either: with a carousel of oversized preview thumbnails of all shapes and sizes, there’s no continuity to the experience, no takeaway beyond “oh wow there’s all kinds of … stuff in here. And if I tilt the phone I can sort of see behind it, for some reason. Cool?”

The software is much easier to live with inside of apps. That’s particularly true in the case of Firefly, whose namesake sprites are very pretty as they flit about and swarm objects of interest in the viewfinder, eventually chewing them up and excreting an Amazon store link so you can get one of your very own said objects. It’s easily the most gorgeous method of online shopping there is, and from what we’ve heard, its unique Tinkerbell aesthetic isn’t coming to other devices anytime soon – so the Fire Phone is the only way to get the “full Firefly experience.”

Other basic elements work as well as you’d expect: the brightness control in the notification shade, the swipe-driven gestures, and so on. But overall, the aesthetics of the Fire OS conjure memories of the old HTC Sense. Not the new hip Sense, but the old skin from “the dark times,” when manufacturer interfaces were at their most bloated and overwrought.  It remains to be seen just how well or poorly Amazon’s software performs out in the real world, but it’s probably not going to win any cosmetic awards.

It’s something different … and that’s awesome

With no “real” Google Play support, a puzzling exclusivity arrangement and a questionable price tag, we continue to have real concerns about the Fire Phone’s viability – but those doubts are easily matched by our excitement at the opportunity to try something new from one of the world’s smartest companies. Dynamic Perspective might not add any utility to the smartphone experience, but seeing it in person has convinced us that those hands-on reactions we saw in Amazon’s teaser video were very real indeed. If nothing else, it’s a feature that makes you stop and say “whoa,” a rare occurrence in this increasingly homogenized smartphone world. And between the gratis year of Prime membership, unlimited free online storage, Mayday support and other unique Amazon offerings, the Fire Phone definitely brings more to the table than its humble hardware would suggest.

At the end of the day, the Amazon Fire Phone is a device we’re excited to review – and given the exhausting pace of the review season that’s led up to this point, that’s no small compliment indeed. If you’re interested in preordering one, you can do so here.

Thanks again to Enobong Etteh of BooredatWork for the supplementary photos that made this piece possible!

Redmi K30 Ultra is said to feature a quad rear camera setup – with one of them using a 64MP sensor – while a MediaTek SoC ticks at its heart.
YouTube 1.8M
Facebook 570K
Twitter 197K
Instagram 133K
RSS