Here’s what the Amazon Fire Phone camera can do

With a 13MP optically stabilized rig and a dedicated shutter key, the Fire Phone camera ain’t no joke. How does it perform in the real world? Come find out!

The Fire Phone is many things to many people: a funky 3D screen; a portal to a Prime membership; a refreshing escape from the normalcy of the typical smartphone world; a gimmick to be disregarded until the next generation – the list goes on. But whatever your personal opinion, the fact remains that as Amazon’s first-ever smartphone, the newest Fire is indisputably significant. And part of its significance lies in its camera.

The Amazon Fire Phone camera is a 13MP sensor backed up by the usual slew of glowing marketing material on the device’s purchase page: it’s a “custom-tuned camera system” with “a fast five-element wide aperture f/2.0 lens” and –we’ll ditch the quotes here because it’s actually awesome– optical image stabilization. The latter is something we’ve been missing on a few other modern smartphones, and the fact that it’s backed up by a hardware camera key here is added sprinkles on the ice cream. Amazon goes on to call out the Fire Phone camera’s free unlimited cloud storage, long nighttime exposures, intelligent HDR, and so on.

How does all that marketing copy hold up to the withering gaze of the reviewer’s eye? You’ll have to wait for our full Fire Phone review to find out – but until then, check out the samples below to see just what the Fire Phone camera is capable of in a variety of lighting conditions, with text by Pocketnow’s in-house photographic expert Adam Z. Lein! 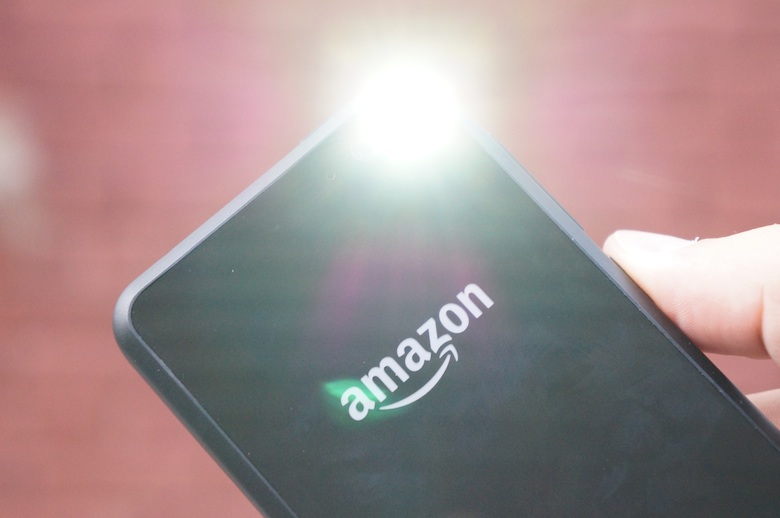 When looking at the outdoor well-lit photos at 100%, like most camera phones, you’re going to notice some noise. Details aren’t very sharp, and there are plenty of blotchy edges. Grain noise gets more noticeable in the out-of-focus areas and there doesn’t seem to be much post processing going on, such as artificial sharpening around high contrast edges. That’s a good thing – but on the other hand, there’s no oversampling that can make for a cleaner, sharper image. You can do the downsampling in software afterwards though, since 13 megapixels is plenty to get a good 3-megapixel image for your social networks.

In the default mode, the camera doesn’t seem to have too much flexibility in terms of dynamic range. You’ll see in the sunset photo that the highlights are clipped significantly, as are the shadow areas. Shooting with the Fire Phone is also frustrating in this regard, as the Fire OS is much too sensitive when setting exposure to match touch-to-focus (see photos 3 and 4 below).

Flipping on the high dynamic range option, of course, gives us more details in the highlights and shadow areas. Unfortunately, HDR mode seems to have an adverse effect on sharpness as well, thus making those details a bit blurry or soft.

HDR mode doesn’t always give us as much dynamic range as we might need, as is evident in this photo of a building at sunset. The bright highlights decimate any detail in the cloudy sky, and the harsh shadows black out any detail in those areas as well.

When it comes to low light images, the Fire Phone takes pictures like burnt coal: mostly black with some blurry grey smoke.  We’re not sure if the optical image stabilization is actually doing anything in these photos since they’re still pretty blurry, very noisy, and very under exposed.  The light sensitivity at ISO 941 with 1/8th of a second shutter in this photo is not nearly enough to absorb what light might be in that scene. So don’t expect PureView-quality low-light images from the Fire Phone.

Video performance has its ups and downs as well. In the sample video below (shot at the maximum of 1080p), there’s significant ghosting in the motion. Look closely at the edges of the people walking in the first clip and you can see their edges are repeated and super imposed on top. Colors are also a bit more muted than we’re used to, and focus tends to drift more than we like.

Image stabilization isn’t perfect, but it does minimize the characteristic hand shimmy a day of pounding coffees during a smartphone review produces. It also results in a nice steady viewfinder picture, which is always a plus in our book. And audio recording is quite nice provided you don’t cover up the microphone – which is surprisingly easy to do.

In sum, the Fire’s video performance matches its still side. It’s an okay smartphone camera – no less, but certainly no more.

Need a refresher on the three funnest features offered by the Amazon Fire Phone? Want to see everything that comes in the box with this “hot” device? Want to see reader questions on the Fire Phone answered live on the air? Click those links, and stay tuned for Pocketnow’s full Fire Phone review, coming later this week!