Amazon Fire phone: better for Amazon or the consumer?

We’ve been hearing about the Amazon phone for years now. Read why Amazon’s Fire phone isn’t exactly what we were hoping for.
Published 18 June 2014, 18:05 EDT

For literally years now, rumors of an Amazon-built smartphone have spread around the web, making the occasional headline along the way. No matter how many times Amazon denied the rumors of an in-house smartphone, the rumors continued to surface. And in recent months, word and more specific details picked up.

Today, Amazon CEO and founder Jeff Bezos took the stage in Seattle, Washington to make the e-commerce site’s smartphone official. Dubbed the Fire phone, as rumors suggested, it brings some new innovation to the wireless space in the form of a 3D interface which the company calls Dynamic Perspective. 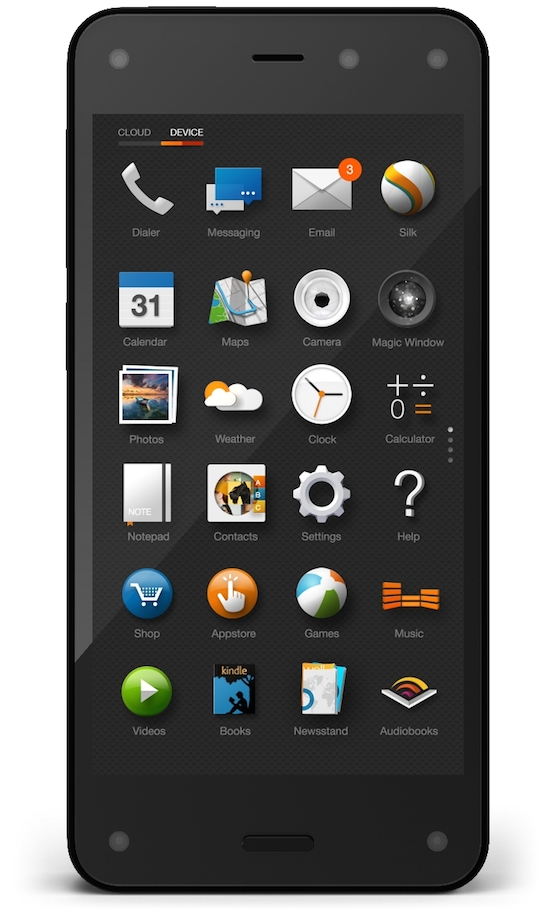 Also, to no surprise at all, it comes with several features baked in to make purchasing items and content – through amazon.com, of course – virtually effortless (as if buying things through Amazon wasn’t easy enough already).

The Fire phone announcement was met with an excitement and intrigue that’s now rare in the industry. New phones are a dime a dozen, and many of us – especially tech journos – are jaded and desensitized to the allure of a new phone.

This Amazon phone, however, is different in the very same way the Kindle Fire tablet was different back in late 2011; it’s a new venture from a company not known for its hardware. Still, we’re not certain Amazon hit a grand slam here.

As far as hardware goes, Amazon seems to have hit the nail on the head – at least on paper. It looks a lot like the crazy bastard child of the Moto X and the iPhone 4S. The hardware and design are understated, the corners have an iPhone-esque radius and shape to them, and the back and front are glass.

Internally, it has a pretty respectable list of specs to boot: Snapdragon 800 SoC, a quad-core Krait CPU clocked at 2.3GHz, Adreno 330 GPU, 2GB of RAM, a 13-megapixel camera with f/2.0 aperture and optical image stablization, 2,400mAh battery, and 32 or 64GB of fixed storage. The LCD is 4.7-inches, diagonally, with a 720p resolution.

But if you take a gander at the face of the device, you may notice something is a bit off. In total, there are six cameras on the Fire phone, the primary camera around back, the main front-facing camera, and the four head-tracking, infrared cameras in the four corners of the face. These corner-mounted sensors are the cameras which power the Dynamic Perspective feature.

So what is Dynamic Perspective, exactly? It’s a “custom-designed sensor system” that tracks your head movements and adjusts how the information on the display is presented to you. For instance, in games like Lili, you can use your head to peek around corner and various objects. It uses the position of your head to simulate an on-screen 3D experience.

The best way to think of it is to think of the parallax effect in iOS 7, except it extends beyond just the lock or home screens and the perspective is based on head movement, not the movement of the device itself.

Another helpful feature is the Firefly button, found below the volume rocker on the left edge of the device.

Have you ever seen something in public and thought to yourself, “What is that? I want it!“? That’s exactly what the Firefly button is for – to answer that question and allow you to “take action”. Press the dedicated Firefly button, scan an object, and learn about it. If it’s a product on Amazon, you’re taken to that product page. Firefly also uses X-Ray to provide information on movies, television shows, information on actors, and more. You can also identify music, scan phone numbers to call or save new contacts, and you can scan web addresses to jump to a website without typing in the URL.

The Firefly button also doubles as a dedicated shutter button. When the screen is off, it’s also a shortcut to the camera. And speaking of the camera, Amazon boasts its 13-megapixel camera is better than both the Galaxy S5 and iPhone 5s – the company called both products out directly.

Both Dynamic Perspective and Firefly come with SDKs for third-party integration. So you’ll be sure to see more apps and games with head-controlled 3D effects or divulging information based on things sensed with the primary camera around back.

Of course, like the Kindle Fire tablets, the Fire phone also comes embedded with Amazon’s software: Fire OS 3.5, Amazon Appstore, Silk Browser, Amazon Instant Video, Amazon Music, Shop, Kindle, etc. Like all Amazon hardware, the Fire phone is the perfect bridge between consumer and more direct sales. At every turn, users will be prompted to use Amazon services or buy products through its e-commerce site.

Amazon is unapologetic about it. After all, the phone has a hardware key dedicated to giving you purchasing information on real world objects.

The part we find most interesting is pricing. The Fire phone is priced comparably to any other flagship on the market. It can be had for $199 with a two-year agreement on AT&T for the 32GB model. Also with an agreement, you’ll have too cough up $100 for double the storage. Sans contract, the Fire phone will run you $649 or $749 for 32GB or 64Gb, respectively.

For frequent Amazon customers, this phone is seemingly great. It has it all and makes buying products or using Amazon services that much easier.

However, there are some less prominent features – or lack thereof in some cases – which should give you pause about the Fire phone.

If you’ve never used Fire OS, there are two things you should know.

One, Fire OS is based on Android, but that doesn’t mean it is Android. What I mean by that is, you will not have direct access to Google’s services – Gmail, Google Play, Hangouts, Play Movies, Play Music, etc. If you’ve spent money on applications in Google Play, you won’t have access to those applications on the Fire phone, unless you “hack“ Google services onto it. Instead, you will have to re-purchase and install apps through the Amazon Appstore and purchase other digital content through Amazon.

Two, the Fire OS interface is a media carousel, not the standard home screen and app drawer you’re likely used to on standard Android. It’s setup to put consumption and play in the forefront while putting productivity and work in the background. That means you can use the Fire phone just as any other smartphone, but the balance of work and play will be heavily skewed towards the latter.

The part I can’t wrap my head around is why Amazon has opted to dive into the vicious smartphone market where it will have to fight tooth and nail for market share – something many weathered smartphone manufacturers have struggled to do over the last several years. Instead, why didn’t it simply release a Firefly app for iOS and Android to make it compatible with the vast majority of the phones already on the market?

Amazon is asking consumers to buy a new piece of hardware for a gimmicky head-tracking feature, a hardware key which makes it easier to buy things from … Amazon, and give up the things which make a smartphone truly useful in favor all things Amazon, all the time. None of that comes as a surprise. That’s exactly why Kindle Fire tablets were created in the first place. It was a natural progression to release a phone with a similar experience, except Amazon left behind the only true draw of the Kindle Fire tablets: pricing.

It shot itself in the foot and turned what could have been a somewhat interesting flagship into another run-of-the-mill smartphone. Instead of the same aggressive pricing that made Kindle Fires fly off shelves, the Fire phone is priced exactly like every other high-end smartphone from a major manufacturer. It’s not the budget-friendly buy like so many were hoping. And for whatever reason, Amazon made it an AT&T exclusive. The exclusivity worked to the iPhone’s advantage back in 2007 and into 2011 because the iPhone was a truly compelling product and the alternatives simply weren’t numerous or up to snuff. In recent years, we’ve seen time and again that the exclusivity model doesn’t work the same as it used to. There are handfuls of comparable and cheaper alternatives at any given time and the Fire phone doesn’t bring the same level of value to consumers as it does to … well, Amazon.

For the end user, the payout doesn’t seem to be all that high for using the Fire phone. You have to pay Amazon a yearly subscription for Prime to get the full advantage of all its services (though there is a limited time offer for a free year of Prime with the pre-order of a Fire phone); you’ll have to switch to buying all your digital content (books, movies, music, apps, etc.) from Amazon to take advantage of Fire OS; and you’ll have to relinquish all your previous purchases on iOS or Android in making the switch.

Amazon is asking all that of buyers and facing a new battle for market share when it could have spent a fraction of the money on a new, better mobile app for existing phones.

Suffice it to say, this is not the Amazon phone you were looking for.

Do I still want to get my hands on it? Absolutely. Per usual, I reserve my final opinion for when I’ve actually tried the thing myself. But here’s the thing. For the price, with all the sacrifices you have to make, and my history with Amazon’s Fire devices, I can’t think of a reason to recommend this Fire phone over any other phone already on the market – especially more budget-friendly phones like the Moto X or Nexus 5. Not to mention, this is coming from an avid user of Amazon services and a paying Amazon Prime user.

Maybe some hands-on time with the phone will change my mind, but I’m certainly not holding my breath and I would not advise you to either.