The name of Amazon’s Fire HD 10 Kids Edition tells you everything about the tablet, while Show Mode docks basically aim to turn your slate into an Echo Show

Now the same Android-based slate is getting its own kid-friendly version priced $50 higher. But Amazon claims the $199.99 Fire HD 10 Kids Edition actually provides a “total value of over $319” when you take its rubber protective case, two-year worry-free guarantee and complimentary one-year FreeTime Unlimited subscription into consideration.

Just like the Kids Editions of the Fire 7 and Fire HD 8, this “all-new” device is internally identical to the standard Amazon Fire HD 10. Because “kids want a real tablet, and not a toy”, they get the same quad-core 1.8GHz processor and 2GB RAM as you do, up to 10 hours of battery life, 32GB internal storage, as well as a Full HD 10.1-inch display.

Tipping the scales at a massive 660 grams due to its shield against drops and bumps, the black and blue, pink or yellow tablet is up for pre-order today, with shipments underway July 11. 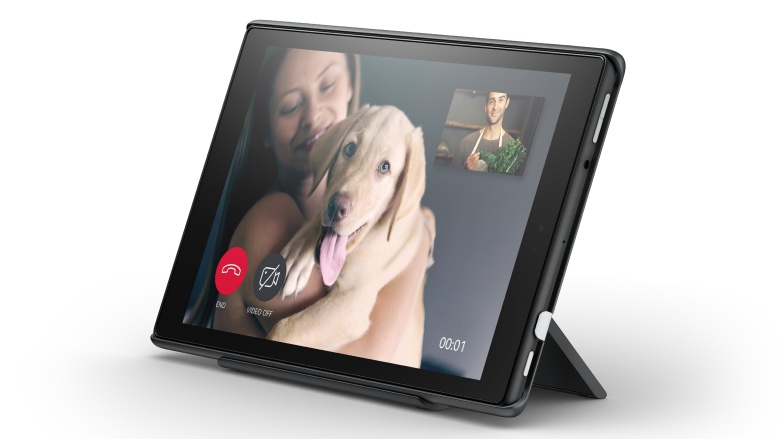 The very next day, another newly unveiled Amazon product available for pre-order already will begin shipping, fetching as little as $34.99. The Show Mode Charging Dock can be paired with a current generation Fire HD 8 or Fire HD 10, holding the slates at an adjustable angle while charging and also enhancing the Alexa experience for the “whole family.”

As the name suggests, the docking accessory’s primary mission is basically to turn your affordable Fire tablet into an Echo Show doppelgänger. The Show Mode dock will automatically transition your Fire HD 8 or 10 into a Show Mode set to be enabled via an over-the-air software update rolling out soon, while simply picking the tab up will allow you to return to the standard, non-Alexa-optimized interface.