Windows 10 has seen a proliferation in the tablet market. Alcatel wants an edge on the rest by adding an LTE modem to a detachable keyboard.
Published 20 February 2016, 13:00 EST

Everyone seems to have a Windows 10 tablet out on the market these days. We saw a glut back at CES — a glut Alcatel was a part of — but for MWC, the newly re-christened company has decided to step up its offerings with a convertible tablet called the PLUS 10. 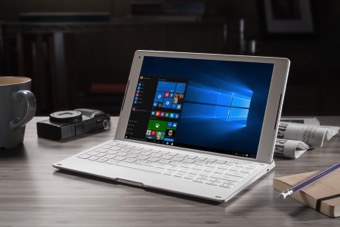 That “10” tells of a 10-inch LCD at 1280 x 800 resolution. It’s paired with two front-facing speakers (with “3D sound”) as both stand as a hallmark of the intended multimedia experience. A quad-core processor powers the device with 32GB of storage, expandable by SD card. The 8,410mAh battery is believed to last an eight-hour day of work or play.

Back outside, there are USB, micro USB and mini HDMI ports in addition to a pair of cameras for video calling. Oh yeah, and there’s that detachable keyboard which also acts as an LTE modem that can serve as a hotspot to up to 15 devices at once. That’s an ace up a sleeve if we ever saw one. No word on how that thing handles its juice, though.

The typical colors are here: silver, white, black and a special gray leather finish. The EMEA regions as well as Latin America will see the PLUS 10 on shelves starting in June.