Last night, IFA brought us a bunch of new product announcements from Alcatel Onetouch, hitting all the bases with new phones, tablets, and wearables. That was just the warm-up lap, though, and tonight the phone-maker is back with a fresh set of hardware, including a couple new phones: meet the colorful Idol 3C and affordable Pixi First.

The Idol 3 was already one of our favorite phones this year, offering exceptional value for your money. For the Idol 3C (above), Alcatel Onetouch doesn’t plan to fix what isn’t broken, and that means returning with a 5.5-inch 1080p display, 13MP/8MP camera pair, and Snapdragon 615 SoC. The handset’s dimensions are nearly identical to that first go-round; really the big difference here looks to be the availability of new color options – and with white, red, green, pink, and yellow, shoppers will find a nice degree of variety.

The Pixi First (below) is also an attempt to deliver a great value, and while its budget specs like a four-inch WVGA display, 512MB RAM, 4GB internal storage, and 5MP/2MP camera setup aren’t going to impress anyone, Alcatel Onetouch is still taking some steps to make the phone feel at least a little premium, like giving it what the manufacturer calls one of the thinnest bodies for a four-inch phone. Look for it in a choice of four colors.

Unfortunately, this news arrives without pricing details, and for phones that are positioned as budget models, that’s a problem; we won’t know just how attractive these handsets really are until we know just how far our phone-buying dollar is being stretched. We know the Pixi First will skip the US, focusing on emerging markets instead, but other than that release details are still being kept secret; we’re told we should hear more sometime in Q4. 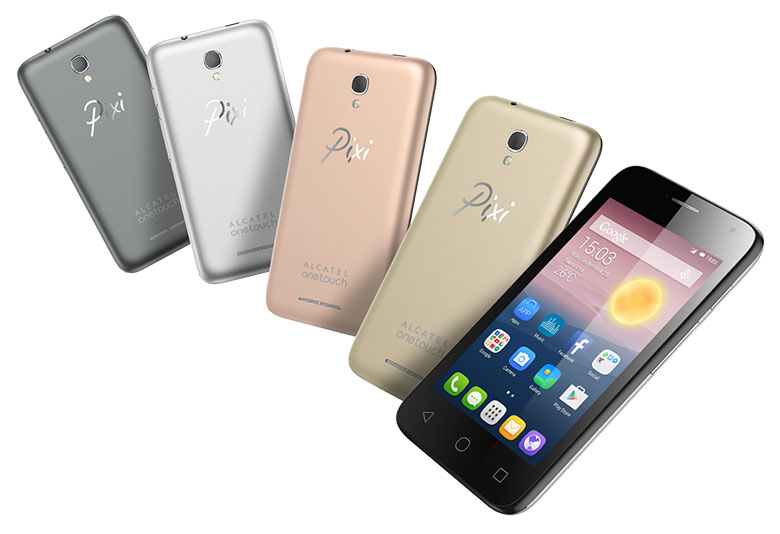