According to both Geekbench and GFXBench records, the upcoming Alcatel Idol 5S packs a Helio P20 processor. It also features 3GB RAM and 32GB ROM.

While it’s probably safe to assume TCL’s main focus no longer lies on Alcatel-branded smartphones and tablets, we had hoped at least the eventual sequel to the moderately successful Idol 4S would set itself respectable goals.

To be clear, we’re talking an Android variant here, apparently running OS build 7.0 already, which is pretty much the only encouraging thing about this seemingly underwhelming 5.2-incher. Yes, the 5.5-inch Quad HD screen of the Android-based Idol 4S is for some reason downgraded in both size and resolution, the latter to the Full HD mark, i.e. 1920 x 1080 pixels. 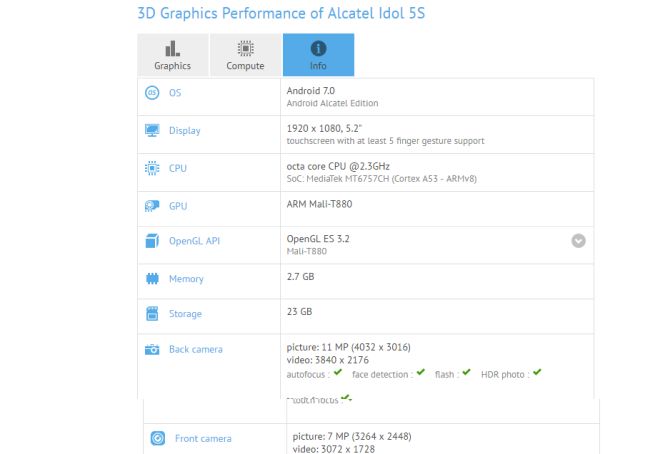 Then you got 3GB RAM, compared to 4 gigs on the Idol 4S Windows flavor, and a 12MP, not 16 or 21, rear-facing camera. Granted, megapixels aren’t everything, but if the rest of the Alcatel Idol 5S screams mid-range, we’re guessing the primary snapper will follow suit. Oh, well, you can probably look forward to an ultra-low price point, if it’s any consolation, 8MP selfie cam and 32GB internal storage. And maybe, just maybe, this isn’t the lone configuration in the pipeline. Right now, we’d even settle for a Snapdragon 821/4GB RAM “top-shelf” SKU.