Get the full launch details on the new Alcatel Idol 4 and Idol 4S, the company’s latest flagship-class Androids.

Alcatel OneTouch has a new name, and as the straightforward “Alcatel,” the brand’s announcing its very first smartphones under this new identity, confirming the flagships we’ve been looking forward to for some time now (and saw leak pretty thoroughly earlier this month), the Idol 4 and Idol 4S.

We already had a lot of these details from that inadvertent early publication of specs, but it’s nice to have launch-day confirmation all the same: 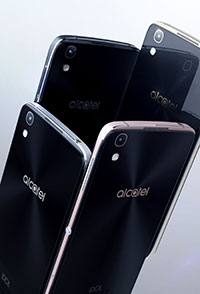 The Idol 4 is a 5.2-inch 1080p handset running a Snapdragon 617, equipped with 3GB of RAM, 16GB internal storage, and supporting microSD expansion. It’s got a 13MP main camera, a wide-angle 8MP front-facer with its own flash, and offers a pair of stereo speakers. The phone gets its juice from a 2610mAh battery and will ship running Android 6.0 Marshmallow.

Then we’ve got the Idol 4S, which a bigger 5.5-inch quad HD panel, and instead of an LCD like on the Idol 4, this one’s an OLED component. This one runs a Snapdragon 652, also has 3GB of RAM, but upgrades storage to 32GB – while keeping microSD support. There’s the same 8MP front camera, but the rear shooter here move to 16MP. The battery’s bigger too, at 3000mAh, and those stereo speakers are back. Just like the Idol 4, the Idol 4S will arrive with Marshmallow on board.

Remember that Xperia-looking circular button on a recent Idol 4 leak? Alcatel’s calling that the Boom Key, and it gives users one-touch shortcuts to jump right into the phone’s camera from standby, boost audio output, change video playback options, and even activate a pseudo-3D parallax effect for the phone’s launcher.

Just like we heard, the Idol 4S will ship with a box that doubles as a Google Cardboard viewer, ready to give users a high-res 3D experience without needing to pick up any extra hardware.

Both the Idol 4 and Idol 4S will be available in gold, rose gold, dark gray, and metal silver color variants. We’re still waiting for full details on pricing and release plans.