The upcoming 4.6-inch Alcatel Flash 3 may not provide direct competition for the iPhone SE, but it should at least take on the Sony Xperia Z5 Compact.
Published 25 May 2016, 03:50 EDT

How badly do you want to see a truly compact Android powerhouse take on and perhaps tower above Apple’s 4-inch iPhone SE? Badly enough that you’re willing to settle for a diminutive flagship from a tier 2 manufacturer like Alcatel, since there’s no reported movement on the Samsung Galaxy S7 mini or HTC 10 mini fronts?

If yes, then you should be happy to check out the high-end (-ish) specifications of an upcoming Alcatel Flash 3, revealed through GFX Bench just the other day. Unfortunately, this bad boy isn’t quite as small as some of you would desire, directly targeting the Sony Xperia Z5 Compact rather than the iPhone SE with a 4.6-inch screen.

It’s also not a flagship in the true sense of the word, but it does outdo the Z5 Compact in the display resolution and RAM departments, and that’s no easy feat. Yes, the Alcatel Flash 3 sports a super-sharp 1,920 x 1,080, aka Full HD panel, with a breathtaking resulting pixel density of 478 ppi.

It offers 3 gigs of random-access memory for silky smooth multitasking as well, and can hoard up to 32GB data internally, presumably with microSD expansion also in the mix. On the software side of things, it’s of course as polished as it could be, Android 6.0 Marshmallow running the show, while a deca-core 2.3 GHz CPU and ARM Mali-T880 GPU handle the raw performance business. 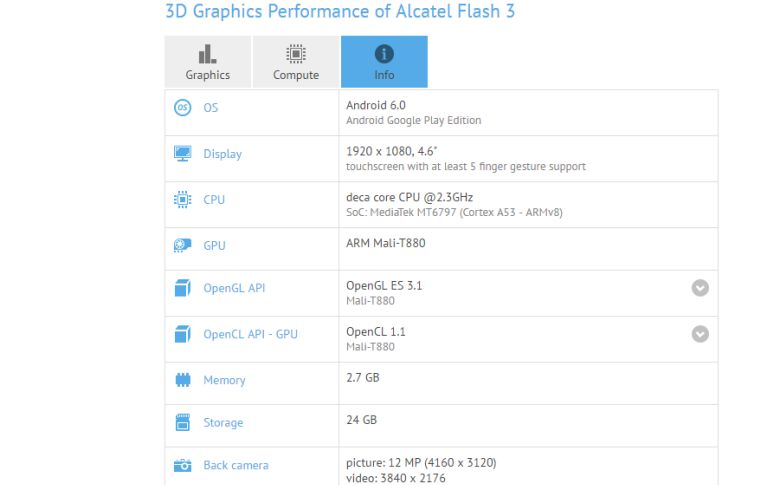 We don’t see this MediaTek Helio X20 SoC give the Snapdragon 820 a run for its money, but compared to 617 or 652 silicon, it’s probably considerably faster, and that’s all one can hope to receive from a compact high-ender these days. Finally, you get a respectable albeit not Z5 Compact-rivaling 13MP rear-facing camera, and a top-of-the-line (all things considered) 8-megapixel selfie shooter.

Now let’s just hope we won’t have to wait for the Alcatel Flash 3 as long as we’ve been waiting for that elusive Idol Pro 4 beast with Windows 10 Mobile.