Keeping track of smartphone branding can be way trickier than it needs to be, even if you’re a mobile device journalist: first there’s Sony Ericsson, and then just Sony (OK, Sony Mobile), and Vaio used to be a Sony brand, and now it’s not (only Sony still owns a share) … you see what we mean. The situation’s been similarly tricky with Alcatel OneTouch, especially as it used to be partially owned by Alcatel-Lucent, but hasn’t been for a while now, and particularly for users not familiar with the brand, it’s not always clear if “OneTouch” is part of the overall branding, or the name of specific series of phone, or what. Today AoT is throwing us all a bone, simplifying its name and getting ready to continue operations simply as Alcatel. 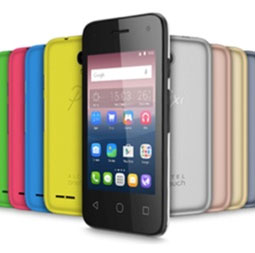 Alcatel (née OneTouch) continues to be owned by TCL Communication, but we’re just going to talk about it as straight-up Alcatel. And it’s also got a snazzy new logo (above)

Along with this rebranding, Alcatel says it’s looking to simplify its message to consumers and streamline its devices. As to the former, the company says that it’s focusing on Millennial users and aims “to offer the features and technology [its] customers need, but keep surprising the users with great experiences.”

The company may be talking “streamlined,” but is sure looks like we can expect a good-sized selection of devices at MWC. To that end, Alcatel confirms the Idol 4 series, as well as mentions the new Pixi 4 series (which we met back at CES) – all comprised of multiple handsets. We’re expecting to bring you news of even more devices than just those (at least if the leaks have been on-point), so stay tuned for further developments.

We get more details about the upcoming HTC Desire 20 Pro, and yes, this will be HTC’s first smartphone to arrive with Android 10