After showing a lot of promise but failing to deliver in terms of smartphone sales volume and profits last year, TCL kicked 2018 off with a long overdue BlackBerry Motion expansion and a fairly interesting CES preview of a “re-imagined” Alcatel product portfolio.

The upcoming Alcatel 5, 3 and 1 Series are supposed to share a premium “universal design language” and a number of “flagship style features”, regardless of the difference in retail pricing.

Oddly enough, while this extensive family of 2:1 devices with relatively thin bezels was expected to be fully detailed at MWC late next month, the spec sheets and MSRPs of two middling models seem to have already made their way to the public.

The Alcatel 3v, which was actually on display in Las Vegas last week without a complete list of features in tow, has been thoroughly leaked as an overall respectable 6-incher with Full HD+ IPS resolution (2160 x 1080 pixels), dual 16 + 2MP rear-facing camera setup, and single 8MP selfie shooter.

The quad-core MediaTek MT6737 processor under the hood isn’t exactly a screamer, and the 2/16GB RAM/ROM arrangement also doesn’t feel quite up to 2018 mid-range standards. But the 3v will apparently squeeze a decent 3000mAh battery into a very good-looking package measuring 8.05mm in thickness and weighing 169 grams. With a rear-mounted fingerprint reader, as well as dual SIM, microSD, Bluetooth 4.2 and Cat. 4 LTE support, this should deliver adequate bang for around 179 Euro on the old continent. 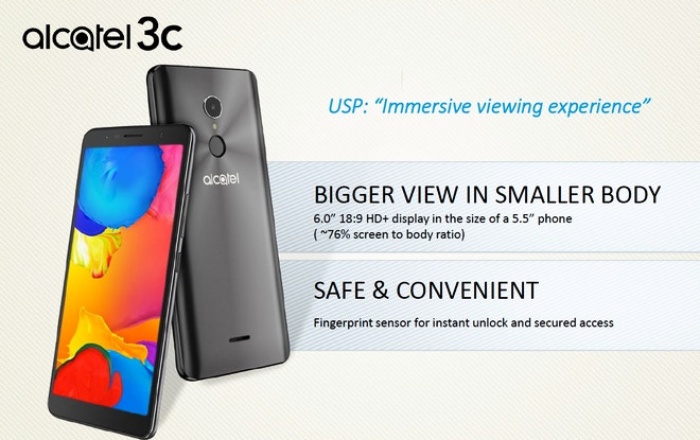 That’s… pretty terrible, in all honesty, and it makes you think how bad things can get for the entry-level Alcatel 1x.