Nokia and third party developers have used the Windows Phone 8 lens feature to create an array of enhancements for the Lumia smartphone. Read on for a tour of the top five.
Published 29 November 2012, 15:17 ESTUpdated 01 April 2021, 12:27 EDT

On Tuesday, I wrote a piece detailing three features the Nokia Lumia 920’s camera needs right now in order to reach feature-parity with its contemporaries on Android and iOS. Preparing for that editorial naturally meant spending a lot of time with the Lumia 920’s viewfinder software, which does a good job blending the sleek minimalism of Windows Phone’s Modern UI with Nokia’s rich set of camera customizations.

Probably my favorite of those customizations -available on all Windows Phones but better-stocked on Nokia Lumia devices- is the Lenses feature, which fills the viewfinder screen with tiled shortcuts to various camera modes. Some are in line with the standard enhancements offered by many of today’s smartphones: panorama, smart shoot, etc. Others, like Microsoft’s Bing Vision and Nokia’s Cinemagraph, are more exotic — and third-party developers can build Lens functionality into their apps as well.

Whether you’re a current or prospective Windows Phone owner, or just someone wondering what’s happening on Microsoft’s fresh new platform, you’ll find some of these lenses pretty interesting. Follow along for a guided tour of five of the most compelling lenses available for Nokia Lumia devices today. 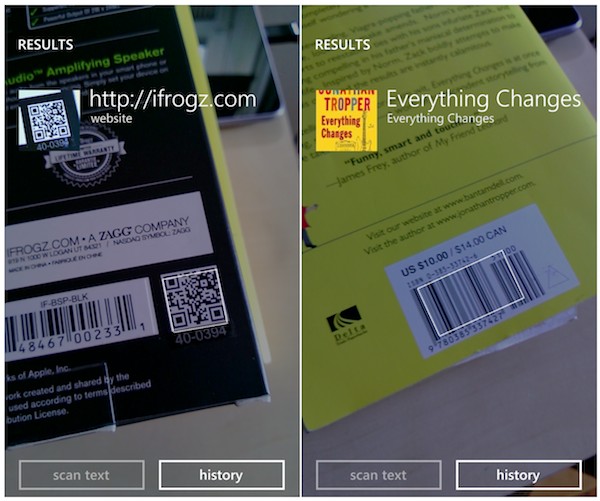 Bing Vision is a good example of one of the Windows Phone frustrations I wrote about recently, namely the condition of “misplaced” app. In essence, Bing Vision is little more than a unified code scanner, functionality which years spent on Android and iOS have trained me to launch a separate app for. AT&T even reinforces this attitude with the bloatware it loads on the 920, which includes a dedicated barcode-scanning app.

As I mentioned in the above-linked piece, though, the frustration is easily overcome by adapting to the Windows Phone interface paradigm: bundling the code-scanner into the camera actually makes a fair bit of sense, especially considering the added convenience of using the shutter button as a camera quick-launch key. Bing Vision itself works quite well in my limited experience, delivering accurate readings of several conventional and QR codes, and offering the appropriate links. The “scan text” functionality, with its built in translation ability, is also quite handy — but there’s a separate lens that’s even better for deciphering foreign languages.

This isn’t the newest or most mind-blowing of live text-translation apps -“Word Lens” for Android and iOS takes the cake there- but Microsoft’s “Translator” is still incredibly cool. Selecting it from the Lenses menu causes Translator to search for identifiable words in the camera’s field of view, translating them on-the-fly into a language of your choosing.

As you can see above, it doesn’t always deliver a perfect translation, and it requires a steady hand to keep from constantly re-interpreting the text as it changes position, but something like this could be a lifesaver the next time you’re a stranger in a strange land.

Update: Sean Misselbrook in the comments was kind enough to point out that due to its downloadable language packs, Translator doesn’t always require an active data connection. I missed that on my initial run-through of the feature, because those options are only accessible via the app and not directly within the Lens. Thanks, Sean! 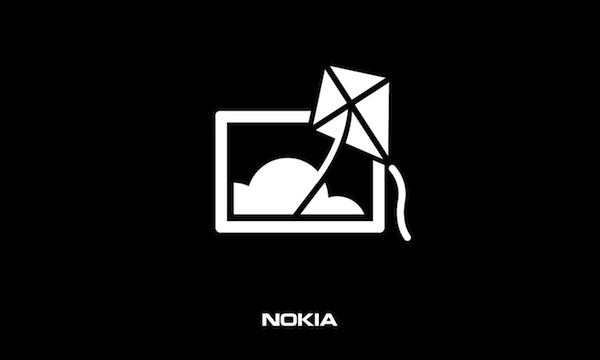 Not all Lenses have to be practically useful, of course. Some can just be mindless fun.

Nokia’s cinemagraph-maker is one of these, allowing you to take a photo of a scene with both stationary and moving components, then tell the software which elements you want to animate after processing is complete. This results in a piece of art that’s more than a photograph but less than a video; though it’s bundled in a .GIF package, it’s so much more than the “animated GIF” we’ve grown accustomed to over the years, because of the selective nature of the animation. Anyone who tells you different is a cretin. You go ahead and take my word for it.

Cinemagraphs have been around for a while in the mobile space, but it’s nice to see Nokia take the effort to build a simple app like this to push the format forward. Unfortunately, as our own Adam Lein discovered in his Lumia 920 review, “exotic” formats like GIF have their downfalls: wirelessly sharing a cinemagraph from the Lumia 920 results only in a still-shot JPG being exported. Only using a computer to pull the GIF off the phone in mass-storage mode preserves it in its natural form. And, depending on your browser settings or those of the hosting webpage, you might only see one cycle of a cinemagraph’s animation instead of the endless looping it requires.

Despite those shortcomings, I still think it’s a cool feature. But then again, I’m the only guy on the team who’s unabashedly in love with Instagram. Speaking of which … 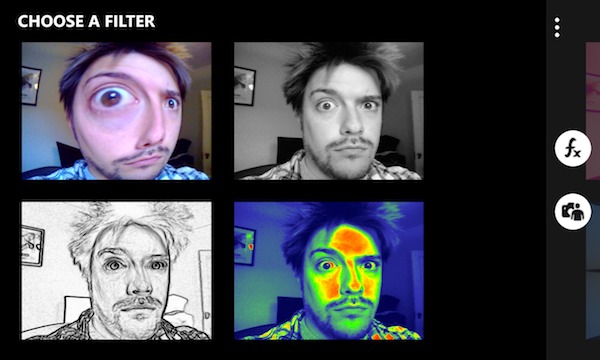 While users wait and wait for the rumored Windows Phone version of Instagram to arrive, other developers are wasting no time rushing in to fill the gap. Some, like Nokia’s Creative Studio, focus on applying filters and effects to shots already taken. Others, like Jolly Dream Studios’ “CamWow,” graft Photobooth-like live effects onto the camera viewfinder, giving you a preview of the ridiculous photo you’re about to take.

CamWow’s sixteen filters stand ready to balloon, warp, twist, invert, colorize, or otherwise manipulate your shot from either of the device’s cameras, which can then be tweaked further in another editing app, or simply shared far and wide to let everyone know how unique you are. While it’s the perfect example of a novelty time-waster, it brings functionality to Windows Phone that millions of self-portrait-addicted teenagers will no doubt appreciate. 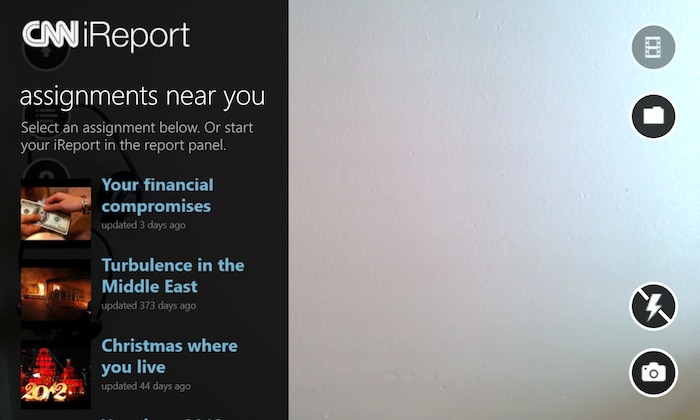 This Lens allows users to jump right from the camera to CNN’s citizen-reporting back-end (registration optional) to share photos and video from events as they happen. Alternately, users can select from any of CNN’s open “assignments” to generate footage based on a CNN-dictated headline. While it may be a case of the app itself being more interesting than its Lens, it makes all the sense in the world for iReport to find a home in the viewfinder. It’s also great to see a big name like the Cable News Network take advantage of some of WP8’s increased functionality.

This article doesn’t even cover all of the titles available in the “find more lenses” section of the Windows Phone 8 store. Every week, we’re seeing more and more activity in the category, and the framework is flexible enough that we’ll hopefully someday see plugins for larger names, like Facebook, Twitter, and Instagram, all with Lenses of their own. But all five of the above features are ready for use today if you own a Nokia Lumia device. Even if you own a non-Lumia Windows Phone, there are more than a few titles to choose from. So fire up your camera app’s Lens mode, hit “find more lenses,” and enjoy strapping on some added functionality to your smartphone shooter.

We’re just months away before the Samsung Galaxy S22 series is official.…

Check out the latest deals on gaming devices at Amazon.com, which feature the Razer Book 13, gaming monitors, and more

Samsung shared some information about its upcoming 200MP ISOCELL HP1 camera sensor, that can capture clearer images both day and night.