That rumored 5.8-inch iPhone might not be larger than current Plus models, suggests theory

A new theory about the rumored 5.8-inch iPhone suggests how Apple could deliver a bigger display without growing the iPhone Plus.

It took a while, but Apple’s finally come around to the idea of selling smartphones with multiple display sizes: already we have the standard 4.7-inch iPhone, as well as 5.5-inch Plus model, and sources sure seem confident that the company’s about to launch a new 4.0-incher in a few weeks. But then yesterday a new rumor surfaced that suggested Apple could have plans for even larger iPhones yet, talking about a possible 5.8-inch handset that could help introduce OLED panels to the company’s smartphone hardware. Do users really want a phone that’s even larger than the iPhone Plus? A new theory suggests that maybe we’re thinking about this all wrong, and Apple could deliver an iPhone with a 5.8-inch screen while keeping handset dimensions in line with 5.5-inch Plus models.

Remember how we’re talking about OLED screens here? What if Apple took a page from Samsung’s playbook and gave us an iPhone with an OLED display that folded around the handset’s sides – just like on Galaxy edge models? Apple’s filed patents related to the idea of over-the-edge displays in the past, and it could theoretically expand screen size to 5.8 inches simply by taking the 5.5-inch iPhone Plus display and making it wider.

That would change the aspect ratio, sure, but it would also give us a phone with a screen that’s no taller than that of an iPhone Plus, while adding these new side panels that could theoretically be used for new interactions.

Keep in mind that this is just a theory, with nothing in the way of real evidence to support it – but isn’t it a curiously fascinating one? Features like 3D Touch have established that Apple’s not shy about giving its users new ways to interact with its phones, so maybe some sort of new side-screen-based menu or gesture control wouldn’t be so crazy.

With rumors that this 5.8-inch iPhone would land in 2017, if not 2018, we’ve still got plenty of time for other ideas to come around – or maybe for someone to help convince us of this one. 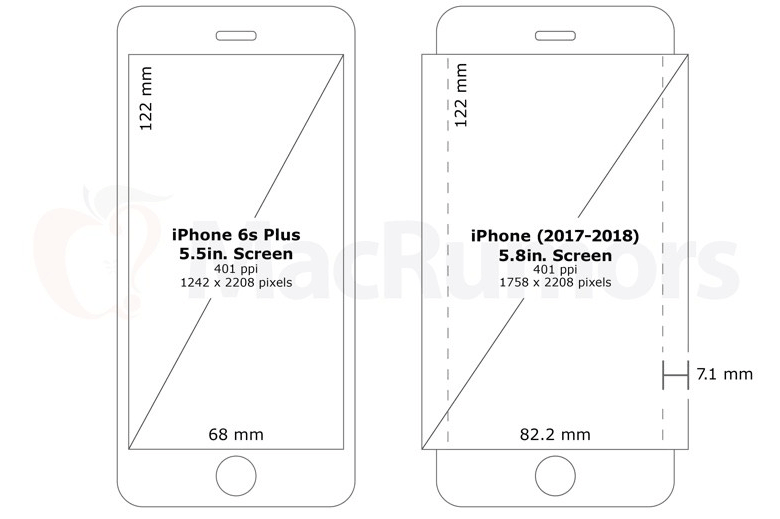