4 ways Huawei is planning on surviving without Google

Here are four ways Huawei is planning on moving on and surviving without Google, initially in terms of its Mobile Services (GMS), and, eventually, without its Android operating system.
Published 24 September 2019, 12:00 EDT

The Huawei Mate 30 Pro, on paper, has the potential to become the best Android smartphone of 2019, if we take a look at its specs. If you consider how much we are relying on services, and the lack of official Google support, it might take away from its swagger even if, at the moment, there’s an easy way to sideload Google Play on the device and access Google’s exhaustive library of apps and games.

While it still might take a while for the device to reach shelves — as there’s probably a lot of lobbying and negotiations going on behind the scenes to somehow circumvent the U.S. ban, at least for phones sold outside of the United States — when they do, they’ll still be powered by Android 10 (AOSP)-based EMUI 10.

Richard Yu, the company’s CEO reiterated that Huawei doesn’t like nor want the current status quo, and would very much love to become officially Google licensed again, but understands that the company needs to move on, should things remain unchanged, in a situation forced upon the tech giant by circumstances.

Here are four ways Huawei is planning on moving on and surviving without Google, initially in terms of its Mobile Services (GMS), and, eventually, without its Android operating system. 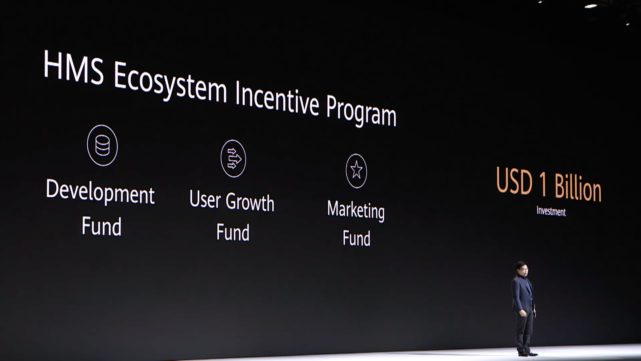 Huawei is thinking big, and for the future, not that it has, given the current status quo, any other alternatives. The Chinese tech giant is willing to invest, in the beginning, for the immediate future, $1 billion in its HMS (Huawei Mobile Services) Ecosystem Inventive Program.

Funds from this investment will be split (it’s unclear whether in equal parts or not) between the Development Fund, the User Growth Fund, and the Marketing Fund. Its purpose is to lure developers over to its own AppGallery, as well as to utilize HMS and the tools and kits Huawei is offering (more on that at point 3 below), in addition to a heavy marketing push that would grow the HMS user pool.

At the end of the day, with Android being open source in the AOSP iteration Huawei is utilizing it, it’s only the Google apps that could be theoretically missing from the AppGallery. For these, Yu said that users can easily use the web version of YouTube, Docs, Drive, etc., and Maps, should they be indispensable.

The lack of Google Play Store, again, in theory, should no longer affect, in a utopian future, users and their experience, as hypothetically all apps and games would become available in the AppGallery, and part of that $1 billion will go just for that.

While there is no decision in place yet, Richard Yu, at a private press conference following the event, touched upon the topic of revenue share for the two largest application stores at the moment: Apple’s AppStore, and Google’s Play Store.

While Apple and Google are generally using a 70/30 revenue split (meaning that Apple and Google take 30 percent from the developers’ revenue for their services and hosting) for purchases and in-app purchases, Huawei could go with a different approach, and a more generous route.

Without handing out specific information, Yu said that it would be a great incentive for developers to get 80 percent of their total revenue in a potential 80/20 revenue split model, or even a 90/10.

Of course, at this point, Huawei is prepared to make some financial sacrifices in the beginning, in order to lure developers over to its own Mobile Services. By having more and more applications available through its own AppGallery, Huawei would close the app gap and offer, in theory, in the future, the same, or a similar catalogue of app and game titles like Google. 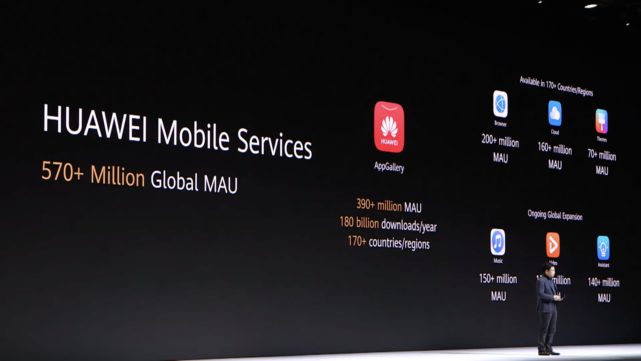 Even though there are, according to the official numbers shared by Richard Yu, more than 390 monthly average users in the AppGallery with 180 billion downloads per year in more than 170 countries, there is still a big issue of the app gap between the AppGallery and the Google Play Store. There are also more than 45,000 apps that integrate HMS Core, but the real problem for users is the lack of apps easily found on the Play Store.

We’re not even going to mention local apps for your cab company, restaurant, bank or airline, but sadly, at the moment, apps like Facebook, WhatsApp, Instagram, Snapchat, Uber, Spotify (and the list goes on) are not present in an official capacity. 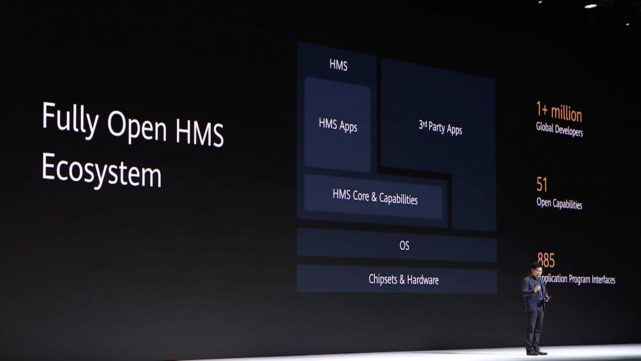 While there is a controversy on whether HongMeng/Harmony OS is ready or not, Huawei decided not to use it yet on the Mate 30-series of smartphones. Yu said that, if needed or forced to, Huawei is ready to launch phones using its own mobile platform as early as next year. Again, it was stressed that this is not wanted by the company, but if it is forced to do so, the tech giant has to continue looking and moving forward.

At the end of the day, Huawei sold more than 220 million smartphone units in 2018, combined with its sub-brand, Honor. This year, despite the roadblocks, the company expects to continue growing and to exceed that number. Regardless of which side you are taking, that’s a lot of smartphones with a potential to generate lots of revenue for developers, which is otherwise lost moving forward, as the Google support ends with the P30 Pro, according to the current status quo.

That’s also a huge chunk of revenue Google is losing (that 30 percent), and while Mountain View might be OK with that, developers could potentially raise an eyebrow.

For a more technical breakdown of the ecosystem, tools, developers, make sure to check out this article from our friends at XDA Developers.

Apple has reportedly been ‘aggressively testing’ the vapor chamber cooling technology for its upcoming iPhones.

Amazon has some amazing deals on the Samsung Galaxy Z Fold 2, on the LG G8 ThinQ, on the Google Pixel 4a 5G and more Android phones