The three best smartphone features (that haven’t taken off)

Despite their creeping commoditization, smartphones are still some of the most exciting pieces of technology you can buy today. The old joke about using such a powerful device mainly for watching cat videos is a good one, but I find myself identifying more strongly with its setup than its punchline, the bit about carrying a device “capable of accessing the entirety of knowledge known to man.”

Knowledge is useless, though, without a fast and easy means of accessing it. That’s where, for the past decade or so, smartphone manufacturers have been trying to one-up one another. Because more than battery life, camera quality, casing durability, display quality and even the all-important ecosystem, the smartphones of today are sold largely on their “killer” features.

The past year has seen each of the three main smartphone platforms debut a hot new feature that captured our imagination at the time, only to fall into disuse and obscurity soon after release. Sometimes that’s due to a learning curve; other times it’s because these features, cool as they are, aren’t quite fully baked yet. So whether it’s due to a slow adoption rate or being taken out of the oven a little too early, these are the best smartphone features of 2016 that you’re not using. 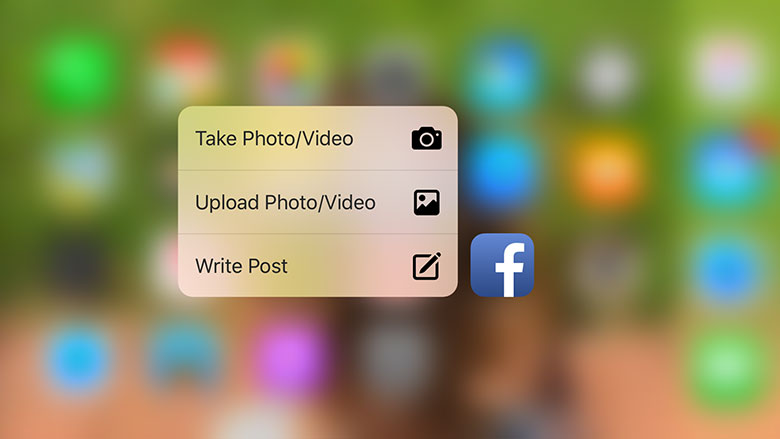 In less than a decade, we went from stylus-based resistive touchscreens coated with cheap-feeling plastic to finger-optimized capacitive displays bonded to sleek glass. It was Apple that kickstarted that transition with the first iPhone in 2007, so it’s no surprise that the same company was responsible for ushering in pressure-sensitive displays on mobile gadgets: first with the Apple Watch as “Force Touch,” then with the iPhone 6S as “3D Touch.” And just as with the tap-and-drag gestures on the first iPhone, 3D Touch feels just right on the iPhone 6S: pressing a little harder on the display opens up a whole new dimension to the smartphone experience, a right-click at once faster and more futuristic than the tired old long-press. Combined with the new Taptic feedback engine, it’s the coolest, most futuristic feature of the iPhone 6S in my book.

It’s also the feature that has almost entirely disappeared from headlines in 2016. Sure, it gets a brief mention when an iOS app gets updated to support it (kudos to Facebook and Microsoft, by the by), but do a Google search for “3D Touch,” limit results to the past month, and behold the barren wasteland. Ask any of your iPhone 6S-toting friends how often they use Peek and Pop and they’re liable to ask you if that’s a new game they don’t know about. At the risk of making a sweeping generalization, most of the iOS users in my life chose the iPhone because they were in search of smartphone simplicity. As intuitive as it is once you get used to it, 3D Touch initially seems like a complication of iOS 9. The fact that it’s not yet implemented across the iPad lineup, and the creeping pace of app updates to support it, means it may be some time before people are routinely Peeking and Popping their way across their iOS devices. 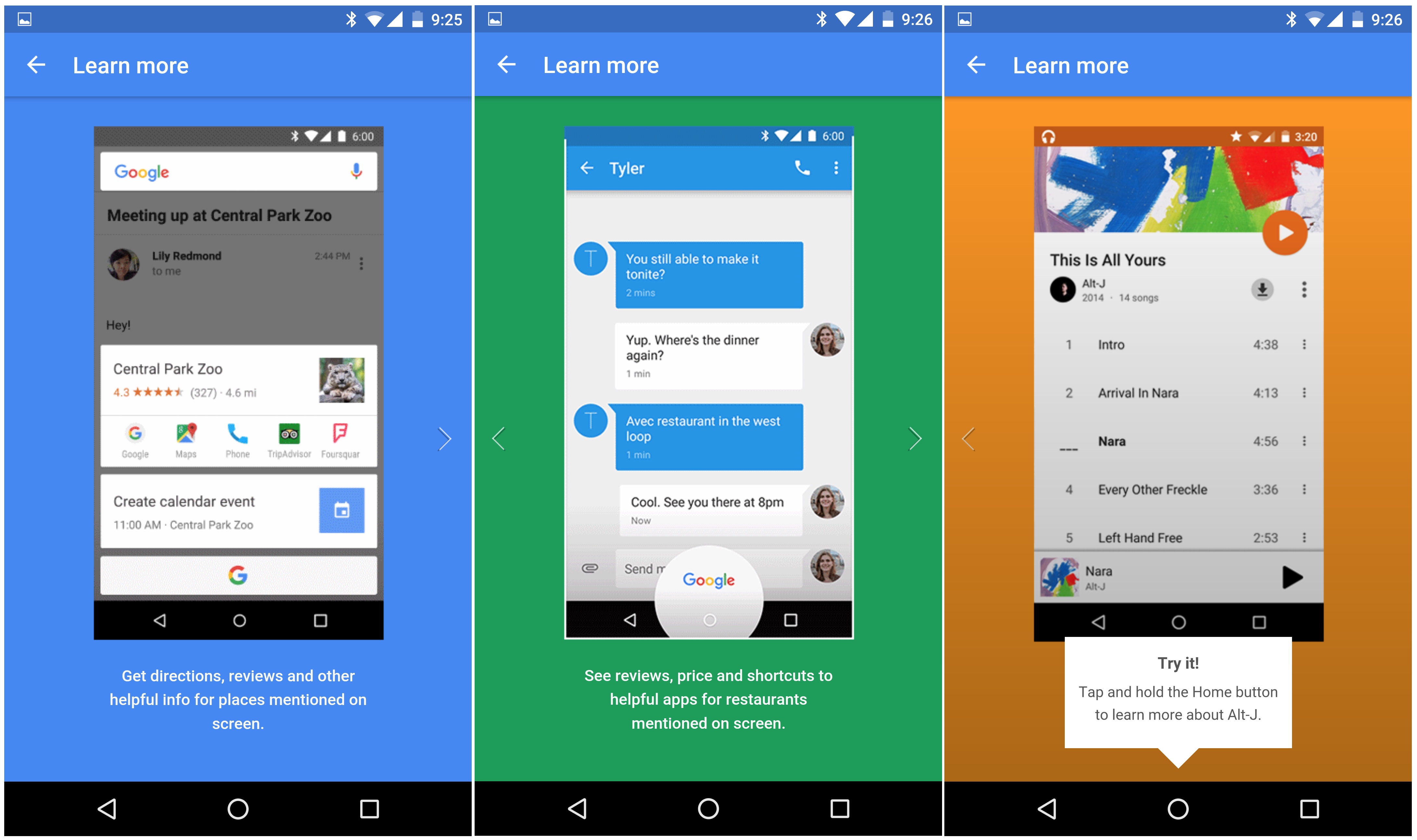 I absolutely lost my mind when Google announced Now on Tap, which initially seemed like the blast of sheer genius Android needed to leap ahead of the competition. The way Google told it, a single keypress would be enough to pull all the relevant information from your phone screen and condense it into an easily-actionable stack of cards. So if your spouse texted you about wanting to go to dinner and a movie (or bowling and mini-golf if you’re wild), you could use Now on Tap to instantly make a calendar appointment for the date, plus get quick reviews for the movie via Fandango (or for the mini-golf place via Yelp) and a shortcut to make a dinner reservation via OpenTable. And if you were using your phone to listen to music while all this went down, Now on Tap would also return a card giving relevant info on the band and song. When it debuted, it seemed almost magical in its simple utility.

The thing is, Google Now on Tap kind of sucks right now. Sure, for limited uses it’s fine: if someone’s Facebook profile shows them checked in to a local business, for example, a long-press of the home key will usually produce a card showing that business’s location and contact info. But few husbands or girlfriends are specific enough in their texts to include things like date, time and location of an upcoming date all closely grouped; more often, such discussions take the form of a meandering series of back-and-forths over email or Hangouts. Portions of the conversation that spill off the page can no longer be accessed by Now on Tap, so you need to wait for the perfect amount of info to be on-screen all at once – and even then the feature’s results are inconsistent. As a result, it’s tough to get into the habit of using Now on Tap. It may become important – even indispensable – in a future release; it truly has the potential to become one of the best smartphone features ever devised. For now though, it’s the annoying thing that happens when you accidentally hold the home button down for too long on your Nexus 6P. 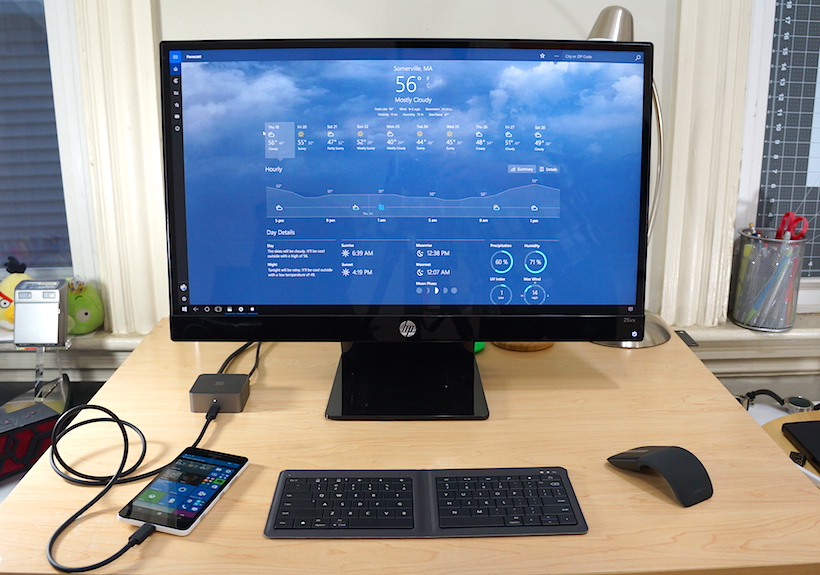 Windows Continuum strikes a middle ground between the two entries above. It’s easily the most demo-worthy of the bunch: from a sheer nerd standpoint, there’s nothing as geektastic as plugging your smartphone into a monitor and keyboard and watching it (apparently) transform into a full-sized desktop PC. It combines the cool factor of 3D Touch with the far-reaching potential of Google Now on Tap.

But just like Windows 10 Mobile itself, Continuum was rolled out much too early and on the wrong hardware. Microsoft’s mobile platform has a hard enough time running on a phone, and the inflation to desktop size doesn’t help at all. Apps need to be specially built or modified to run in Continuum mode, and thus far very few of them have been. The result is an experience that feels awesome when compatible apps are used (Outlook, Office, News/Weather, Messaging) but frustrating when others can only be run on the smaller phone screen. And at the end of the day, it’s still a smartphone doing all the work. That means what should be the best part of the experience – running the full-sized version of the Edge Browser on a big screen – is inconsistent and often sluggish to the point of freezing. If Windows on smartphones continues to be a thing, Continuum could someday be one of its best features. But given Microsoft’s track record in the category thus far … I’m not holding my breath.

You’ve probably got some issues with some of my choices above, and you know what? That’s great news. I love hearing how wrong I am (and I love any excuse I can get to put the above gimmicks to work). So whether you’re fervent 3D Touch superfan, a Google Now on Tap-per, or a member of the Windows Continuum … hit me up with your story in the comments below.

If it were up to me to choose only one, I’d pick the Galaxy S21 Ultra over the iPhone 12 Pro Max. Read to find out why!

HUAWEI Mate X2 marks a radical shift in terms of design and internals, but how does it stack up against the Mate Xs? We assess the upgrades.