Microsoft’s Surface team announced a bunch of product updates and some new Surface headphones. Is any of this game-changing?
Published 04 October 2018, 16:00 EDT

On October 2, Microsoft held a nice press event in New York City to announce a few new things mainly coming from the Surface team. I was very excited to go to this since Panos often has a cool trick up his sleeve to surprise us with. That original Surface Book announcement was really well done. Revealing a laptop with a detachable screen that works as a tablet was totally unexpected at the time. The original Surface Studio announcement was a nice surprise, too! With that, Microsoft was kick starting the creative professional desktop market which was traditionally dominated by Apple Macs connected to Wacom Cintiq pen displays. The Surface Studio seemingly led Wacom to build a large pen-based tablet computer as well. The Wacom Cintiq Pro Engine is clearly a professional-grade competitor to the Surface Studio. But what did Microsoft announce as a means to kick the Windows platform ecosystem into new markets and scenarios? 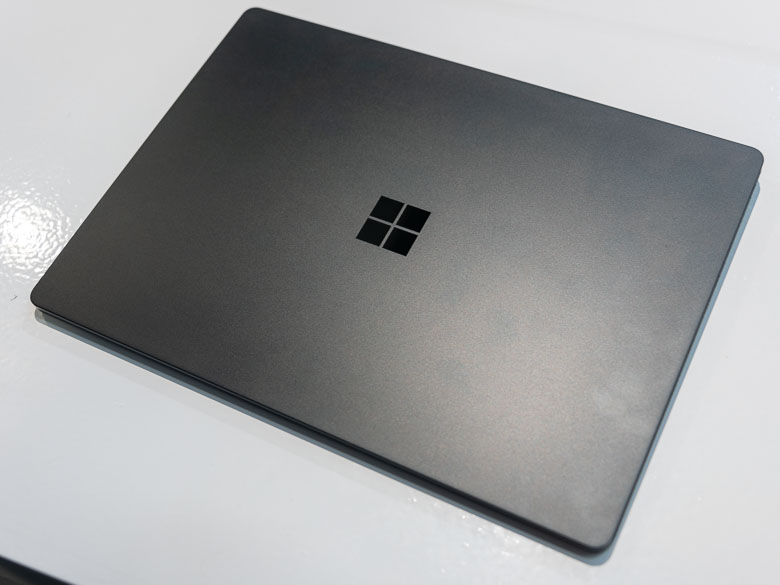 We got a new Surface Pro 6 and Surface Laptop 2. The big difference with those updates are that they’ll come in black instead of the platinum color we’ve seen since the Surface Pro 3… and they have slightly newer processors. That’s about it! Nothing game-changing there! 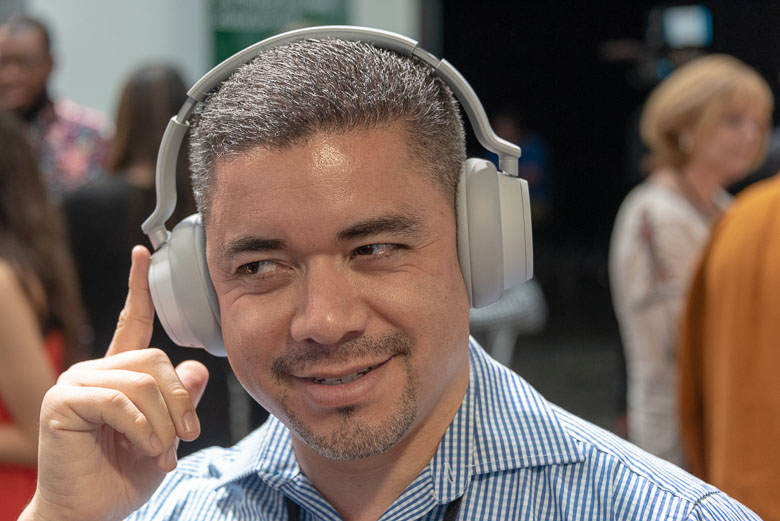 Okay, I guess it’s the Surface Headphones that are supposed to be the game-changing new product this time. 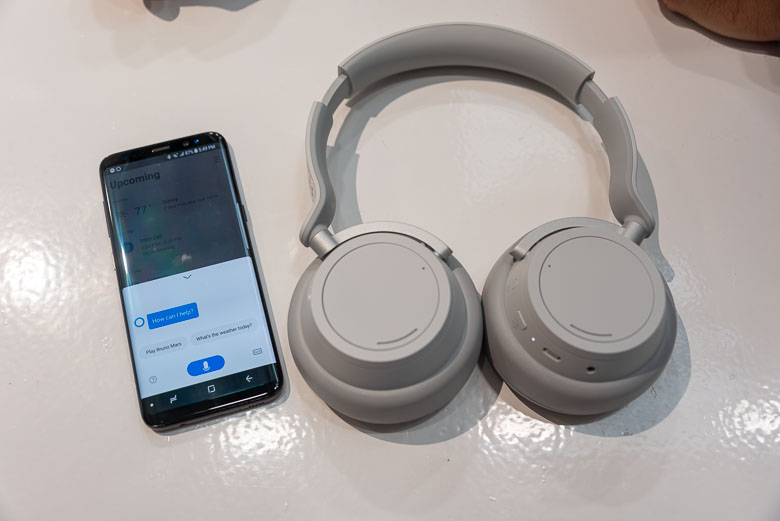 These new headphones are naturally wireless bluetooth headphones which will work on anything with the Bluetooth A2DP stereo music streaming profile. The external panels have capacitive touch sensors that you can use to tap functions into the headphones. Single tap, double tap, triple tap, and tap & hold have different functions, and that’s fine, but certainly not intuitive. There are also dials for controlling volume and noise-cancelling levels. There are sometimes beeps that you can hear when you activate certain functions, but I don’t know what the beeps mean. There should have been a speech UI confirmation of what I just did telling me something like “volume up” or “next track”.

The one kind of cool feature is that the headphone microphones are always listening for the “Hey Cortana” speech UI activation command. So you can easily initiate a Cortana conversational speech UI hands free.

If this is supposed to be creating a new market, it should have done something completely new. Like a whole new interaction method… that’s what made the original Surface Pro, Surface Book, and Surface Studio so popular.

If we’re going with headphones as a new interaction method… which I totally believe could be a really good idea (See: A conversational UI smartphone)… it should have done something really special. I’m talking about something like built-in LTE so you don’t need to carry your phone. GPS tracking, ultra-violet radiation sensors, and heart-rate monitoring would be awesome features to include in headphones.

Built-in LTE could allow the headphones to integrate with Cortana directly to her server-based skills. Stream Spotify music without a phone? Manage my calendar and email with no screen? Hear GPS directions or calendar reminders read out loud? How about front facing cameras used for speech-based augmented reality (as opposed to that other kind that blocks your vision)? “Hey Cortana, translate that into English” could be a command for sending an image of a sign to the cloud and translating it for me right there. That would have been great!

With health tracking features, Cortana could actively speak tips and motivational information into my ears. Hearing “Your heart rate is approaching the anaerobic zone” while working-out could be extremely helpful! 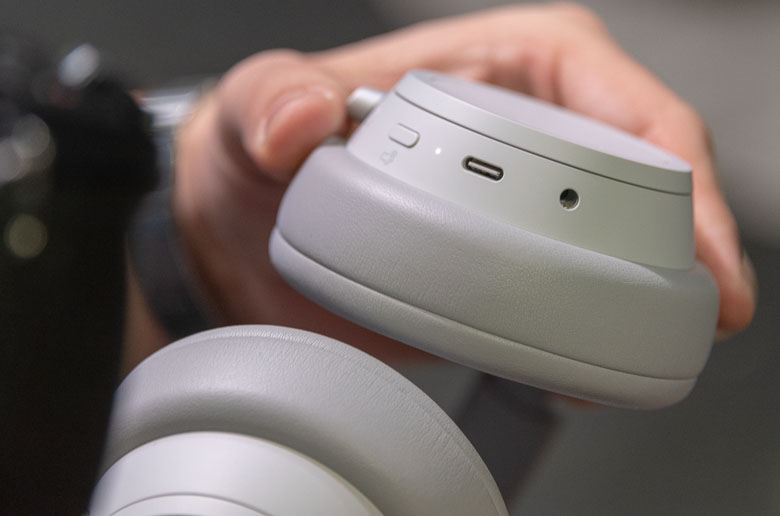 Another weird thing about the recent new hardware announcements from Microsoft is the crazy inconsistencies regarding USB-C and USB-A ports. The new headphones have USB-C. 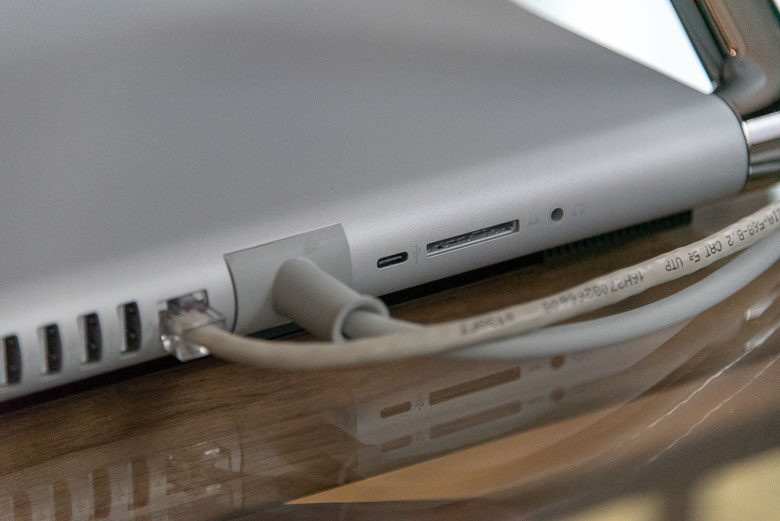 The Surface Studio 2 has USB-C. 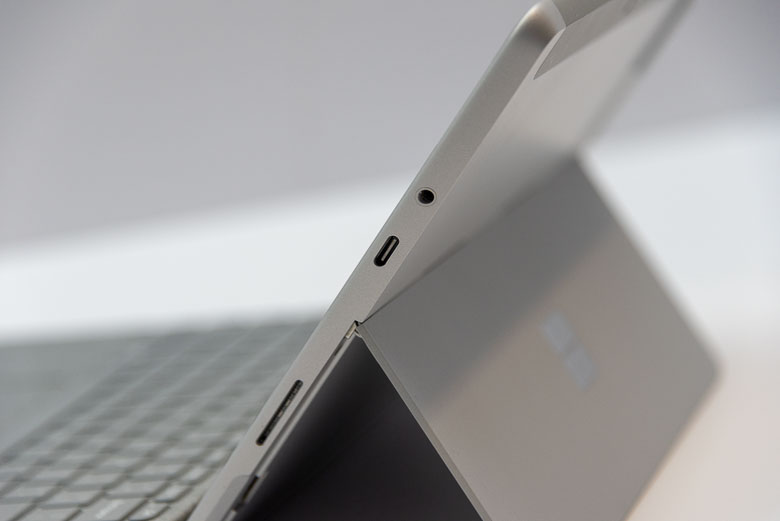 The Surface Go has USB-C.

But the new Surface Pro 6 and Surface Laptop 2 are still stuck with only one USB-A port. Really all of these things should have 2 USB-C ports and 2 USB-A ports! Or at least one of each. I know some people are all-in on USB-C, but it still sucks in terms of compatibility problems (and was poorly designed for usability). It’s going to take years to get USB peripherals upgraded and compatibility issues ironed out, and even then the port’s interface isn’t as forward thinking as it should have been. 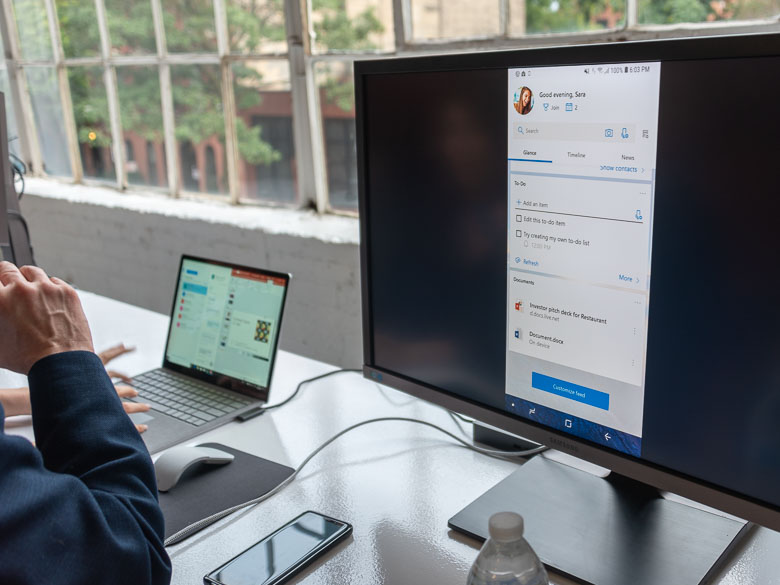 Microsoft also showed off a few software updates coming soon. First off we got the Windows 10 October 2018 update which brings a sync-able clipboard feature as well as a dark-mode file explorer.

I also got to see some new software things that bring some functions to Android that I had on Windows Mobile 2003 around 15 years ago. There’s a screen mirroring feature that lets you control an Android phone on a desktop computer with its whole user interface in its own window. There’s also a new app that can show recent photos on your android phone along with a text-messaging interface. Again, we had this kind of thing on Windows Mobile and Symbian back around the turn of the century. The new apps for these functions aren’t very good either. They have giant colored skittles next to each message that are very distracting and serve no informational purpose. The SMS conversations also cannot be backed up, exported, or copy/pasted into other programs. One of the biggest advantages of having that kind of function 15 years ago was being able to organize conversations in one single place. Today, our messaging interfaces are messier and more disconnected than ever.

Microsoft’s October 2018 announcements here were a bit disappointing. Usually, the things that the Microsoft Surface team comes up with are really innovative and potentially game-changing. Even things that eventually failed, like the Surface RT and Microsoft Band, were still genuinely innovative. Maybe next year we’ll see something really exciting?

Check out the latest deals on Apple’s 12.9 and 11-inch iPad Pro models, as well as the more affordable 10.9-inch iPad Air