The 2014 HTC One model pops up in 3D printed form, and its makers claim information from insider sources, used to build it.

The 2014 HTC One model, which we’ll call HTC One Two, has been rumored for quite some time with the codename HTC M8. The image you see above, and below, is allegedly a 3D mock-up printed in resin of the upcoming phone, and the makers of the print claim the details were received from an insider with knowledge of the phone-maker’s plans for the One refresh.

The phone is more or less the same, though with rounder corners. The screen is rumored to be a tad larger than on the 2013 model, coming in at five-inches. The top and bottom still appear to hold the dual-front-facing speakers — probably still under the BoomSound brand — while a 2.1MP webcam can be seen on the right of the top speaker. The outrageous bottom bezel will probably hold the HTC logo as well as capacitive buttons.

Turning to the back we’re seeing almost the same, One-like, arrangement, with a larger, oval hole next to the camera, which could very well be the place for a dual-LED flash (or variations of an LED and Xenon flash, or a simple LED flash with a microphone). The camera us rumored to be the same four-megapixel UltraPixel shooter — HTC, please, change that!

On the inside, hear-say talks about either a Snapdragon 800, or, the newest, 805 SoC — which supports 4K video — 16GB of (this time, expandable) internal storage, and Android 4.4. If the storage will indeed be expandable, we’re likely seeing a removable battery too.

As far as announcements are concerned, reports claim HTC will likely go for MWC 2014, instead of a special event which we’ve seen this year, but neither of the above has been yet confirmed. 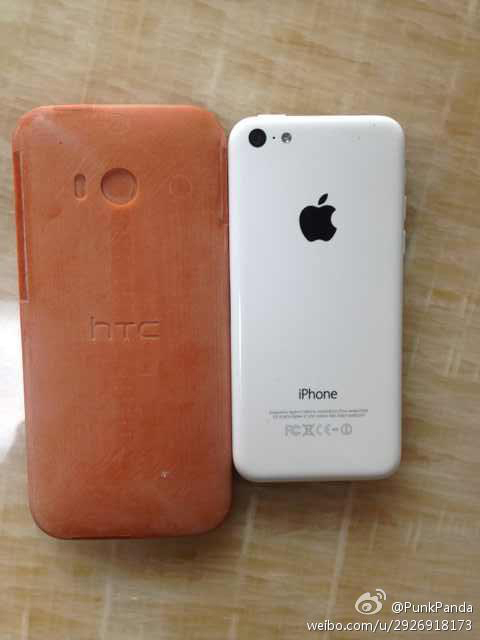