10 months with the Microsoft Band

Find out how the Microsoft Band has held up to 10 months of sweaty exercise and heavy usage.
Published 29 August 2015, 00:29 EDT

Today, my Microsoft Band kicked the bucket.  After 10 months of heart rate monitoring, GPS location tracking, footstep tracking, sleep monitoring and smartphone notification displaying, it’s no longer functional. The screen has stopped responding and well… after 10 months of heavy amounts of sweat, the rest of device ain’t pretty either. If you want to see what my Microsoft Band was like when it was brand new, take a  look at our original review from last year. A lot has changed since then. 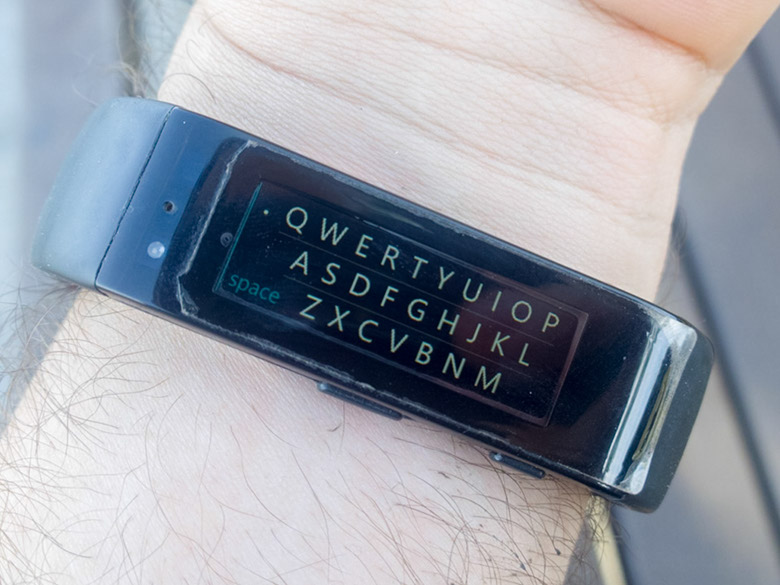 Of course, the Microsoft Band has seen a few nice updates since it was originally released.  There’s the keyboard above that lets you reply to text messages. You would think this would be absolutely horrible to use on such a small screen, and while trying to press the right letter is certainly difficult, the word prediction capabilities worked extremely well.  Swiping to the left shows the words I typed and it was almost always exactly what I had intended to type. Pressing the action button would send the message and my smartphone could stay on the charger in the other room.  Optionally, I could also use Cortana’s voice recognition to reply to text messages.  Having easy access to Cortana from the wrist was cool, but since the Band doesn’t have a speaker, I’d have to read responses so it wasn’t really that useful. I’d rather use a Bluetooth headset which was more efficient in most cases. 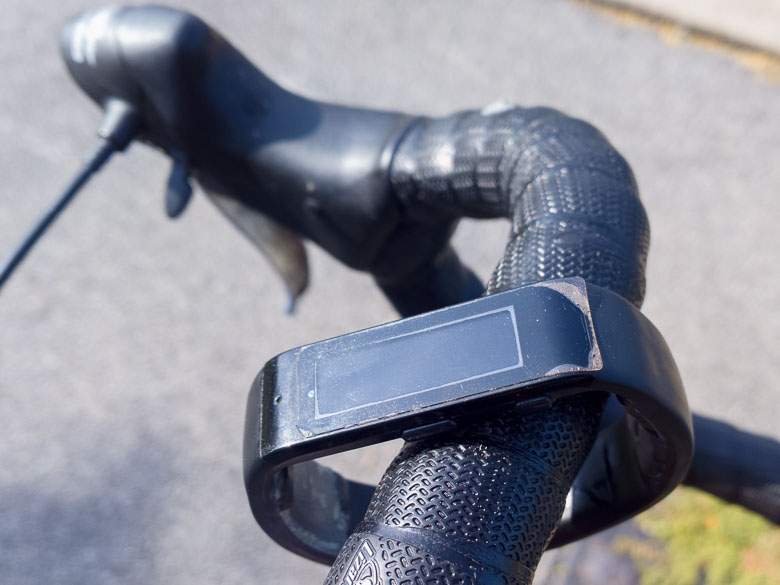 Support for tracking bicycle rides was another thing that was added to the Microsoft Band after its initial release. As an avid bicyclist, I loved this feature.  Although I don’t like how the band rubs against my bar tape when holding the shifter hoods. I’ve got holes in my bar tape from that now. Microsoft added the ability to automatically sync the bicycling data with the popular Strava bicycling website a while after they added bicycle tracking support, which is pretty great. Golf swing tracking support and numerous new guided workouts were added over the months as well. A few other data syncing capabilities were added too, including Microsoft’s own HealthVault which probably should have been there from the beginning.

A Microsoft Health website was eventually added too. That allowed me to analyze exercise data more efficiently and even had a few extra features like calculating the maximum volume of oxygen I can use during intense exercise (VO2 max), which happens to be an “elite” 56.1, by the way. 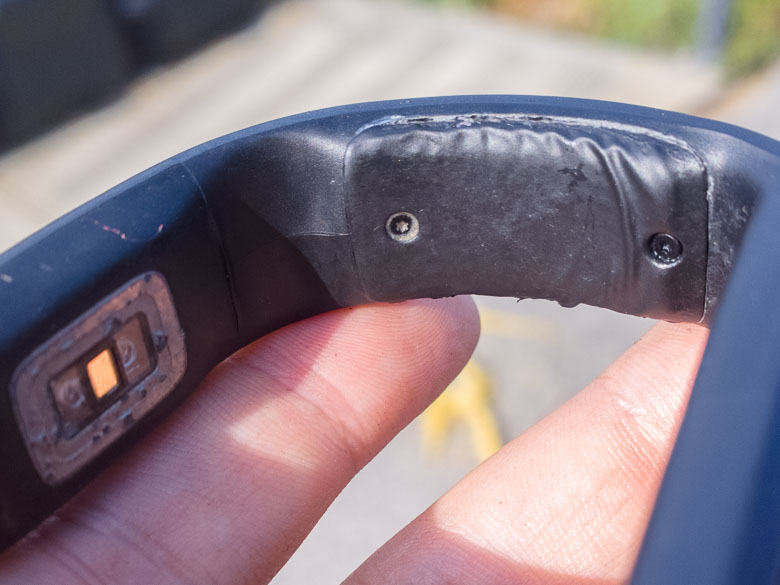 After many months of sweating, one of the battery covers inside the Microsoft Band started looking like this.  It would get all wrinkly like my sweat was dissolving the adhesive that kept it attached. Also notice what’s happening to the metal surrounding the heart rate monitor in the clasp of the band.  It’s become spotted with bumps growing like barnacles. It doesn’t look like rust, but certainly seems like some kind of corrosion. 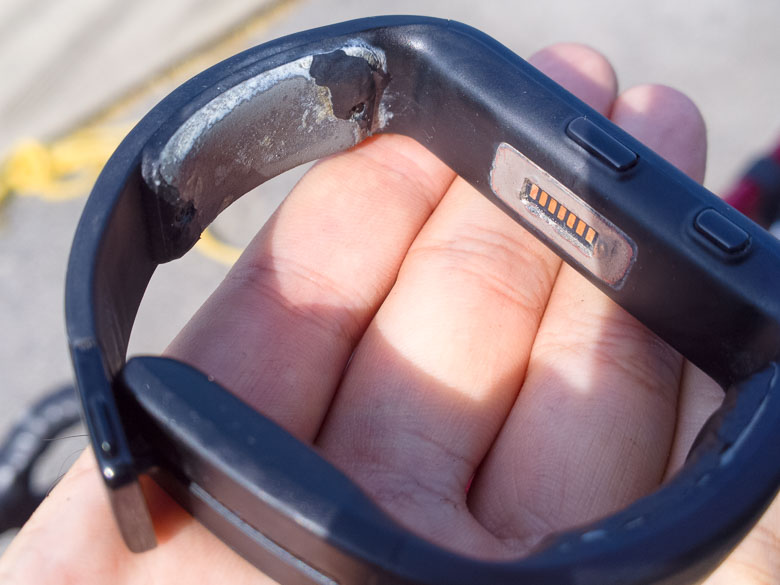 After a while longer, the battery covering just about dissolved completely in sweat.  Also notice some corrosion surrounding the charging port. Cleaning it after working out every time didn’t help… maybe because I would often work out until its battery died completely. 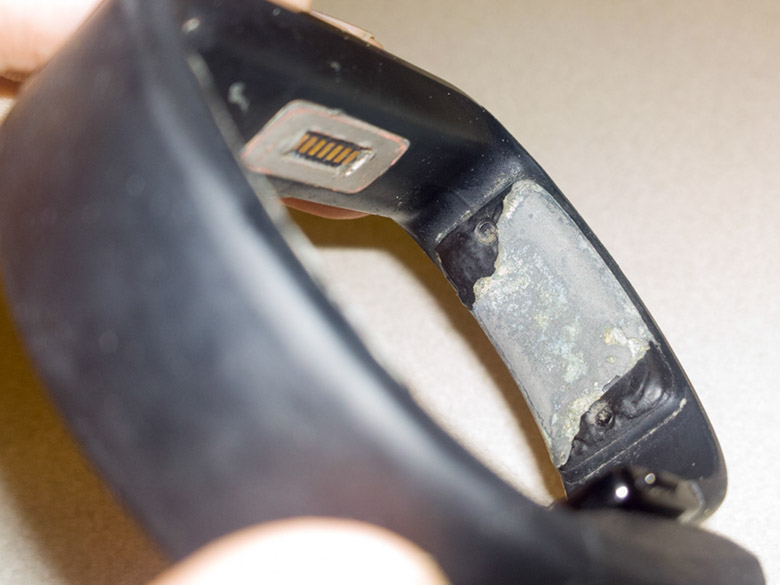 Here’s another view of the battery after the cover dissolved.  Microsoft said that there’s no danger in using it like this, so I kept using it to see how far it would go. 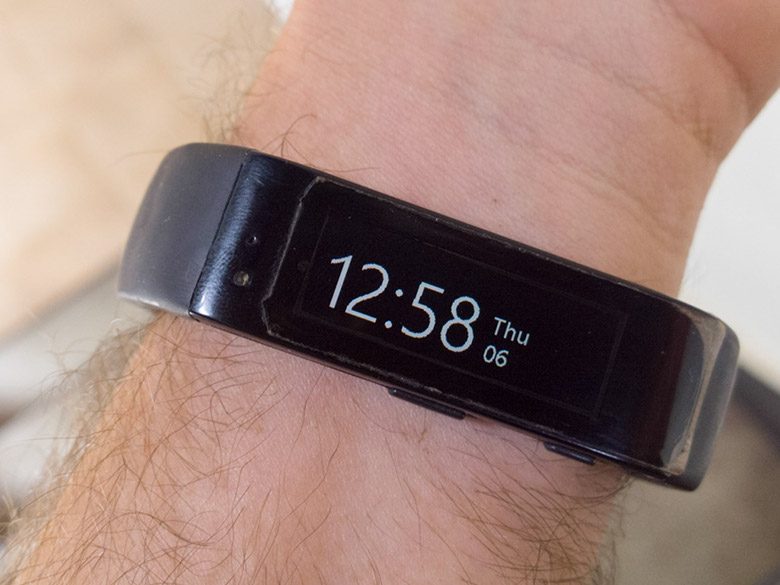 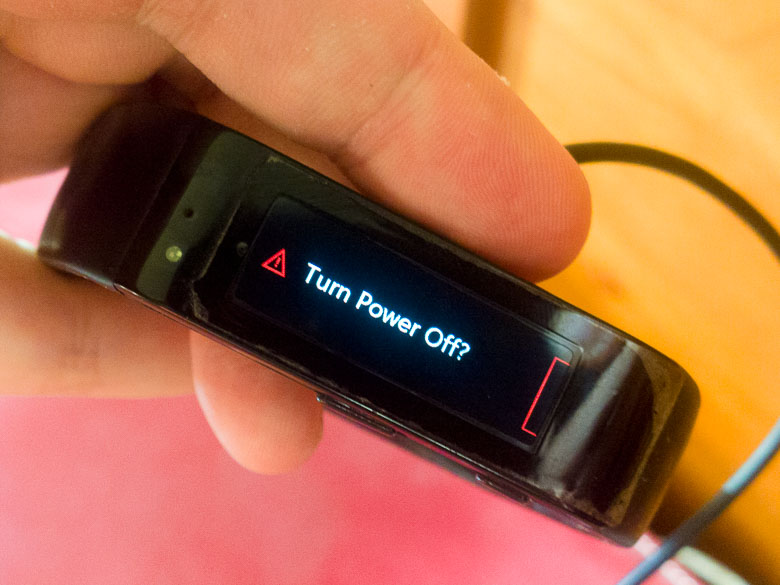 The sleep/power button has become very stiff over the months of use and it has become very difficult to use. Most likely it needs an internal cleaning.  At one point the right side of the screen stopped working. It looked like there was a slight faded spot in one area. Then the next day, the screen became completely unresponsive and my Microsoft Band is stuck on the “Turn Power Off” screen. Plus my last bicycle ride never seemed to sync. So it’s time to retire the Microsoft Band… or exchange it for a new one at the Microsoft Store since it’s still under warranty.

I certainly didn’t baby the Microsoft Band like I often do with my other electronic devices in order to keep them lasting longer.  I used the Microsoft Band almost every day.  It got soaked in sweat many times and had to be cleaned frequently. At the beginning it was uncomfortable to wear, but I got used to it and the constant heart rate monitoring was was very useful in deciding where I need to do more exercise or when I should slow down to keep in the preferred heart rate zone. It provided a lot of insightful data about my health and helped me learn how to improve myself even more.  The Microsoft Band is a high-end health tracker that collects a lot of data, but it would seem that its build quality and lasting endurance against hot sticky sweat could use some major improvements.  Thankfully, while plenty of other users have seen the same issues, Microsoft has been reportedly very good about replacing them with new units in those cases. The Microsoft Band was really intended to be just an experiment and proof-of-concept for the new Health platform.  Luckily the next version of the Microsoft Band is expected to be announced in October.  The original Microsoft Band was accidentally successful as they only made a small number and underestimated the demand for a product like that.  Perhaps version 2 will bring some serious improvements that will make the high-end health tracker (low-end smartwatch) even more successful.

Are you excited to hear about what improvements might be in store for the Microsoft Band 2?